After 382 days away from home, the Ocean Watch made its way back to Shilshole Marina after accomplishing what no sailboat has ever done – circumnavigated the continents of North and South America. 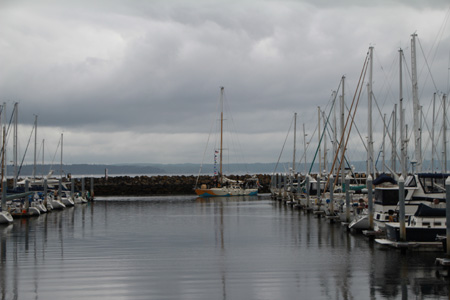 Ocean Watch as it pulls into Shilshole Marina.

The nearly 28,000 nautical mile sailing expedition called Around the Americas launched last May to educate the public, in particular kids, about the threats to our oceans. “It’s good to be here,” Captain Mark Schrader told the crowd of about 50 who gathered. “It’s very emotional seeing all of you.” Along with the crowd at the dock, kids were lined up at Golden Gardens holding signs to welcome the adventurers home.

“We had the opportunity of a lifetime,” Schrader said, “It’s a magnificent highway out there and we took it.”

State Representative Reuven Carlyle spoke with enthusiasm about the “Around the Americas” project. “it’s just an extraordinary journey!” Carlyle exclaimed. “As a father of four kids you see how kids come alive when science becomes real for them and that’s the essence of what a project like this is really about.” 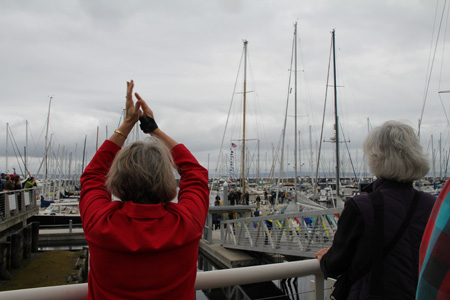 Onlookers clap and cheer as the crew docks.

The Ocean Watch will move to the guest dock at Fisherman’s Terminal to host an open house this Sunday from noon to 4 p.m. Meet the crew, tour the boat, learn about onboard research and participate in hands-on marine science activities led by the Around the Americas Education Team from Pacific Science Center. The event is free and open to people of all ages.

Actually, there were closer to 150 people there than 50.