The lutefisk eating contest at the Ballard SeafoodFest is always quite the show. The crowd cheers for the lutefisk-eating contestants.

Ten lucky contestants pulled up a chair on Saturday afternoon to compete in five rounds of the fishy speed-eating with hopes of winning cash – $50 for third place, $150 for second place and $250 for first place. Before the contest, emcee Tim Hunter explained the rules – hands must be on your lap until Hunter yells “go!” and you must eat and swallow your entire serving. “I don’t care how it goes down your pie hole, but it has to go all the way down,” Hunter told the contestants. 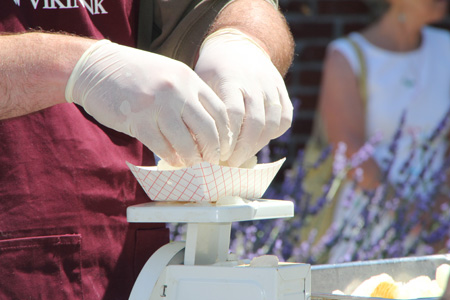 The lutefisk is carefully measured before each round.

During the first round, contestants ate a half pound of the traditional Norwegian fare, but the portions kept getting larger. Finalists had to stuff a full pound of lutefisk in to win the grand prize. 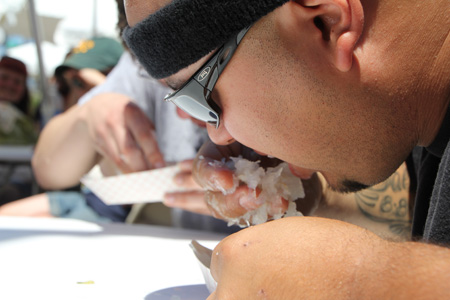 After each round, the slowest eaters were eliminated. David Brazzle (above), a novice lutefisk eater, sat down at the table not knowing what to expect. He had never tried lutefisk before today. “The big chunks were the worst part,” Brazzle tells us after his third round elimination. In the final round, a father and son duo went head-to-head. Sam Sacharoff, the son, came in second place last year and was here to take home the $250. His strategy this year was a little different than last year’s. “I didn’t try necessarily to be the ‘winner’ in the first few rounds because i know they try to torture you towards the end,” Sam says, “I wasn’t anticipating 3 1/4 pounds, though, that’s a lot.” His dad, Ira Sacharoff, competed 17 years ago when things were a little different. “They weren’t serving a half pound at a time back then, it was just a monstrous glob and after awhile I started to taste it and just gave up,” he says. 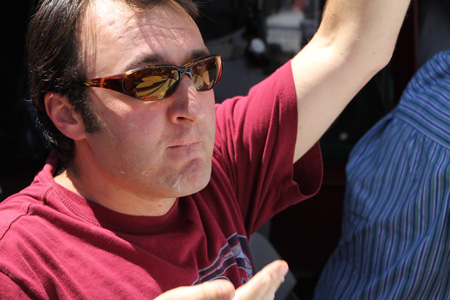 In the end, the younger Sacharoff walked away with the grand prize – and the bragging rights. Here’s the video…

You couldn’t pay me enough to do this…

Where is the disclosure – that you promised us three days ago?

SeafoodFest is the biggest fundraiser for the Ballard Chamber, which is suing to stop the Missing Link Trail.

You guys are members of that group and it should be noted here.

It makes me sad that Ballard’s biggest bloggers are members of the group suing to stop the Missing Link.

You could at least do the right thing and let your readers know.

Here’s what the GeekySwedes told us three days ago:

“However, we agree that transparency is always the best policy. So we’ve added a disclosure to this story and will be adding disclosures on all subsequent stories, not only about the chamber, but the merchant associations as well.”

…and no disclosure from the Swedes.

You are sad. That is about the only thing that makes since in your idiotic posts.

Resident, no one here in Ballard gives a crap about your sucky bike trail. Buy a Subaru and STFU already. Eat some lutefisk or something.

“Resident, no one here in Ballard gives a crap about your sucky bike trail. Buy a Subaru and STFU already. Eat some lutefisk or something.”

In fact many many people care about the completion of the BG trail, look at the comments, probably the most commented on issue. Too bad the BCC can’t get its head out of its donkey and allow the path to be built. as designed and approved.

Hey Resident go to your room ,you have a big time out, you whiny ,spoil all the fun bully. By the way I support the Geeky Swedes 100% and I ride my bike for transportation. So go to you room now and sulk….

The reason there are so may comments is due to the ability to post under as many alias’. There are a couple of zealots flooding the comments with their CBC dogma.

In this day and age of obesity, eating contests are just gross! They should not promote overeating in this way.