The U.S. Environmental Protection Agency is sending its dive team to look at the remains of a 165′ light ice breaker Coast Guard Cutter Onondaga that is under 25 feet of water near the Ballard Locks. 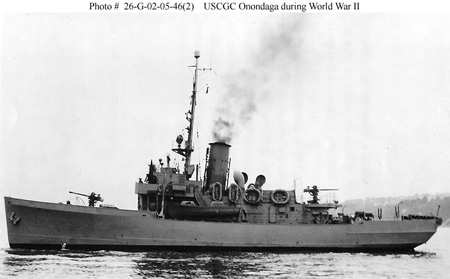 From the EPA release:

The Team will inspect the vessel for any hazardous materials, batteries, fuel tanks, etc. The Cutter is lying on the bottom of the Lake Washington ship canal, in approximately 25ft. of water, near the Ballard Locks. The survey is being done to support EPA’s “Puget Sound Initiative” to help protect both fish and wildlife habitat and local residents from possible water pollution threats.

Wow, that’s crazy! 25 feet doesn’t seem like nearly enough water to hide a boat that big for so long.

It is not exactly hidden. You can see it on Google Earth or Maps if you search for Ballard Oil and then zoom in to the south end of their longest dock. Part of the ship is still above the water.

It is not exactly hidden. You can see it on Google Earth or Maps if you search for Ballard Oil and then zoom in to the south end of their longest dock. Part of the ship is still above the water.

Wow you’re right. I see it two docks west of Ballard Oil. And it looks like a boat is using it to tie off.

It is an historically interesting vessel in that it was in Dutch Harbor when the Japanese attacked and was one of the few sources of return fire against the marauding aircraft. My father told of sailing on the “Rolling O” as a Coast Guardsman in support of the Loran station on Middleton Island in the Gulf of Alaska. Rough weather had the ship living up to her nickname rolling through 90 degrees, sailors traversing fore and aft passageways with one foot on deck and one on alternate bulkheads. He mentioned the bow had been reinforced with extra plating for ice duty. In the late 80’s I was rowing in the ship canal and noted an interesting older ship with a painted name obscuring the welded plate name Onondaga. I drifted toward the bow where the extra plating was evident and realized I was looking at a ship my father had been on in a far away war. Later, after it sank at its mooring, I drifted over its much reduced deck, a lot of the superstructure had been removed, marveling at how small it was compared to what I had imagined. Little do the vessels that pass it now on… Read more »

Thanks for clarifying, I can see that now. Very cool!

Damn… that’s what happened to my boat. I wasn’t that drunk, for that … long.