Game enthusiasts have a new heaven right here in Ballard. 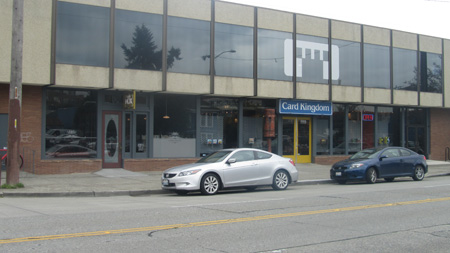 Card Kingdom, which recently relocated from Phinney Ridge, just opened at 5105 Leary Ave. NW. The new space is much, much larger than their previous location, manager Annalisa Delfel tells us. They have rooms for different game types, such as family games and role playing games. They also have minis, collectible trading cards and euro-gaming. 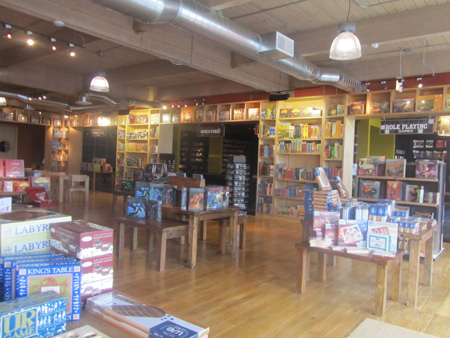 In the middle of the store are several tables where people can come play games from the game library. “This place is designed to hang out in,” Delfel says. This isn’t just a store, there is also a tournament room which will hold about 50 people and private gaming rooms that people can rent. . Delfel says they plan Magic nights, Pokemon tournaments and D & D encounters. They’ll also have instructional game nights for people interested in learning new games. 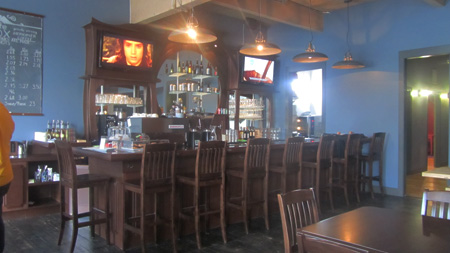 Connected to the store is the new Cafe Mox, a gaming parlour, where people can come in, play games and drink beer, wine or Herkimer coffee.

Looks pretty cool and spacious. I will definitely have to check it out.

They’re watching Frodo in the bar.

Oh, very nice. Have to check it out.

I stopped in over the weekend. The place is amazing. If the right crowd finds them, I think they’ll do great. They’re a bit off the beaten path, but they said evenings have been pretty busy already.

You can borrow games and sit in the cafe and play them. Any game in the store, the manager told me — if they don’t already have a copy open, they’ll open a copy for you.

The game selection is fantastic. The beer selection is looking good, too. They appear to have more than a passing interest in making the food good. I hope these guys live forever.

This cracks me up…the place should totally market itself to Baby Boomers (like us!) who never pictured themselves at a Senior Center playing games all day. What to do with modern day Baby Boomers? Let them have a beer and play games! Brilliant.

How fitting. And good eye!

Is that the old car dealership? Great to see someone in it, if so!

I rode past this place and did a double take. Surprised a game store could do enough business to pay the lease on a space that large. I do plan to check the place out and knowing they have Herkimer coffee has just made them a must-visit for me, especially if they have wi-fi. Also nice to see a retailer who seems to understand the importance of visual merchandising. A lot of stores simply look bad, messy and poorly organized.

That used to be the inflatable boat company. It’s sad to see more maritime business leaving Ballard but great for Card Kingdom! This company is Berserk Games, which moved from their small storefront on Phinney into this newer location, reimagined their store and changed their name. They even lifted their barista straight from Herkimer! (He’s been bouncing off the walls for months in excitement over going to the new Card Kingdom/Berserk gaming cafe). We’re going to check it out tonight and get our Gamma World on, woo hoo!

We need one of those in Memphis!

I will be there this weekend. And so will GeekGirlCon’s TARDIS.