The Ballard Roadside Raingardens pilot project has been a topic of conversation since they were installed last year. Whether you like them or not, it’s obvious that not all of them are working as designed – something Seattle Public Utilities is not taking lightly. 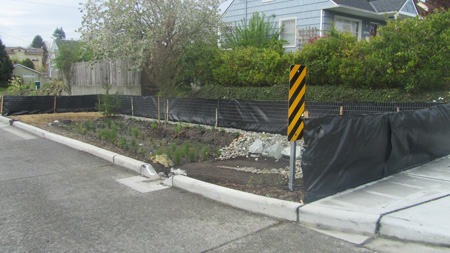 Back in February, the city met with neighbors of the raingardens to discuss what they are, why they’re there, how they’re supposed to work and to hear concerns. At that meeting, Seattle Public Utilities Deputy Director Nancy Ahern promised more communication. Since then, a Task Force comprising of members from the neighborhood and the city has been meeting. 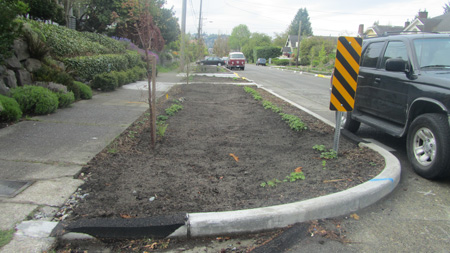 Today, a letter from Ahern was sent to neighbors discussing many of the concerns that are being addressed by SPU. The goal is to “close the loop with the larger project community,” Ahern tells us on a recent phone call.

From the letter, the concerns include: 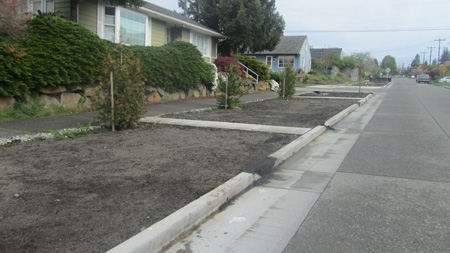 A look at one of the filled in roadside raingardens

“Since this was a pilot project and the concerns stated above were unexpected outcomes, SPU agreed to remove raingardens that were not working and/or that met with serious objection,” Ahern writes. Of the 50 raingardens installed in Ballard nearly two-thirds are working correctly or will be retrofitted, the other one-third will be removed. Ahern tells us that the changes will cost the city about $500,000. “It’s dearly paid for, but will pay off in the future,” Ahern says. 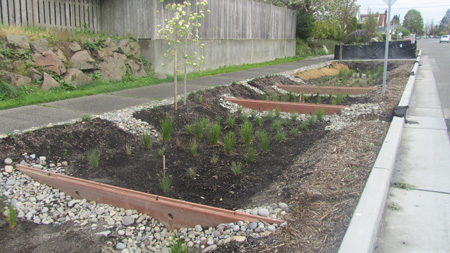 “Our experience with this pilot has been immensely valuable, and we are already taking advantage of the lessons learned from this project in our ongoing work with green infrastructure,” writes Ahern in the letter to the community.

As of right now, Ahern tells us they have no other roadside raingarden projects planned. “SPU is planning to take a year to gain experience from these designs before looking at possible roadside raingardens in other parts of Ballard or the rest of the city’s SCO basins,” she writes.

I’m thinking the lesson they learned is to do a perk test on the build site before they dumped millions into the project.  Who’s running this circus anyway?

Just keep them the f*ck away from my street.

The fish rots from the head.

amen that is, derp

Seems they might have done some testing before they installed them on a city street. Perhaps they did but that is not clear from the article.

What is painful is the $500,000 to correct the problems. Don’t they know that social services are being cut? Where are the priorities?

500k? What, to throw some dirt over the top and plant grass? How many bogs did they create? Am I missing something?

does anyone have a sense or statistic on how many or what percentage of the installed raingardens DID work as designed?

All these naysayers with their NIMBY comments are driving me nuts. I get the criticism of the technical problems, no excuse for that – but in areas where this approach can work the environmental benefits are worth it.

Article above said 2/3 worked as designed, and 1/3 didn’t.  If they’re having that much difference in 4-5 blocks of a single street, then the soil conditions are a lot more variable than they thought.  Lesson: do a perc test on every garden patch, not just the ones at the ends and one in the middle.  Of course, if they’d done that, the naysayers would be out in force telling us what a waste of money it is to repeat tests on every lot up and down the street.

I’m looking forward to a rain garden at our elementary school soon.  And yes, they will do a perc test there before construction starts.

Much of this was funded via a federal “shovel-ready” stimulus grant.  Apparently, they didn’t do the full testing because they were in a hurry to get the federal money before the grant deadline.

Every rain garden that I see on my regular dog-walking route has been filled in and is sporting some fresh trees and new grass.  Based upon my experience, the entire project was a failure.

that makes no sense.
is your avatar supposed to be legible at 54 mm?

So let’s compare this another wonderful social engineering project thrust upon us by our government: busing in the 60’s-70’s. A complete failure that our government NEVER admitted was. So with these rain-gardens we’re now going to get the same idiots “fixing” them that brought ’em to us? Why is Seattle Berkley North? Is everybody too stupid to know what/when/how to do anything without their nanny, their government? Why does compassion always include spending everybody elses money? How many children would “just another $500,000” feed?

judging by the big swathes of lawn that existed on these planting strips before the rain garden installation, I’d say most people are too stupid to know what to do without their nanny.

if we didn’t have a government, most of these clowns would’ve paved over Ballard a long time ago.

You sound like all them Tea Baggers out in Eastern Washington.  Did you get lost and end up in Ballard?

You really don’t know the folks in eastern Washington do you. They wouldn’t feed the children with the 500K they would ask for a 500K farm subsidy instead.

You really don’t know the folks in eastern Washington do you. They wouldn’t feed the children with the 500K they would ask for a 500K farm subsidy instead.

The area that was converted to rain gardens was not “large swathes of lawn” before the conversion, it was the concrete street (24th Ave NW).

When I was a kid, we called them “ditches”.  It’s a good idea to landscape them, I hope this works out well.  I could be a good deal. But it would be better to provide support and let the neighbors take care of them, if they want, like the traffice islands.  Some neighborhoods have beautiful traffic islands, others have eyesores.
I can think of a lot better uses of half a million dollars!

I liked it better as “ahem”.

“All these naysayers…” I think it’s one, perhaps two naysayers who post under multiple names.

More BS from the blithering idiots that suck money from the public trough. Who got fired for this waste of money? You guessed it, no one.  The planner of this project is probably up for an Obama administration appointment

It was a poorly executed idea that trashed the neighbourhood, potentially costing several thousand dollars in lost properly value. And for that you are calling me a NIMBY? I guess it’s easier to inflict houses-and-cars-are-evil policies when you rent and don’t pay the actual price for it.