Since 1936 a totem pole has watched over the Totem House restaurant – until today. The rotted, weathered pole is no longer there. 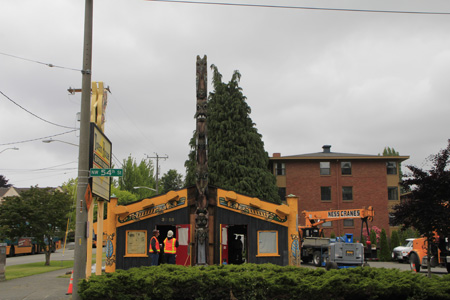 While John Shepherd is busy renovating the interior of what will be the Totem House Red Mill, the building’s owner is having the 75-year-old totem pole completely refurbished. 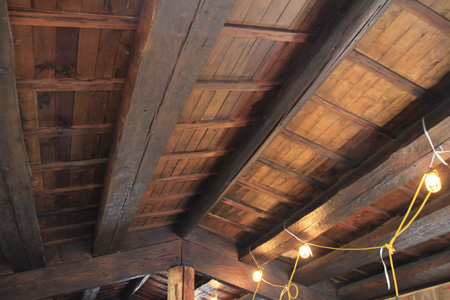 The newly-exposed beams inside the building.

This morning two cranes were brought in to lift the 30-foot pole onto a boat trailer to make the journey up to Neah Bay where Greg Colfax, a member of the Makah Tribe, will get to work. He has one mission, “To return it, as close as possible, to the day it was installed,” Colfax says. “It will have the same painting, it’ll have the same glow of its newness.” 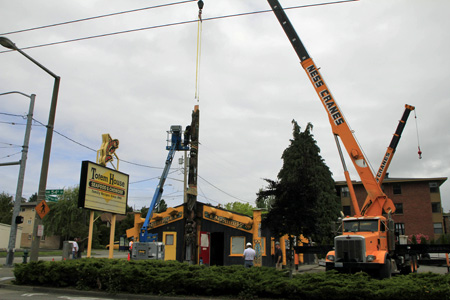 The pole was originally carved by Jimmy John, who was from a tribe on Vancouver Island, Colfax says. The pole is done in Haida style, which is not John’s traditional look. Colfax tells us that John was commissioned to carve this totem pole by the original building owners back in the 1930’s and there is no story in the pole’s 30 feet. 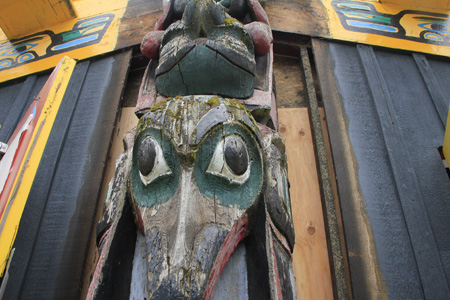 A close-up shot of the weathered, old pole.

Through the years the pole has gone untouched. It is rotting on the outside and the inside. “The totem pole has been neglected over the years and needs a complete restoration,” Shepherd tells us. 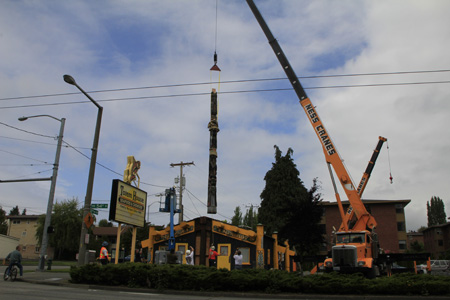 As the crew worked to secure the pole this morning, they had several concerns: One was the rotted wood, another was that they had no idea how the pole was secured to the ground and the building. Turns out it was sitting on a six-inch piece of steel rebar with two stakes halfway up, attaching it to the building. That’s it. 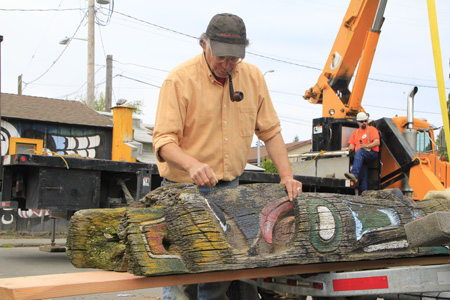 Colfax, shown here, says he has a nervous excitement for this project.

Colfax has a deadline of August 15th to have the pole restored back to its original look. Shepherd, in the meantime, is working to restore the rest of the building for a September opening. “Hopefully this thing will live on forever,” Shepherd says.

I’ve always been a Red Mill Burger fan and to see that the owner is taking the care to restore Totem Smoke House to its orginal grandeur takes my admiration to a whole new level.  See you on opening day!

take note yuppies. this is how you open a new buisness in old ballard to open arms.

Yuppies? Are u still living in 1986? You’re supposed to focus your anger at hipsters now.

I hope they got the right guy taking down that pole. Remember the guy a couple of years ago who stole the totem pole from that Renton (?) park. He had a crane and everything, clipboard, looked real official.

that exposed ceiling looks great.  looking forward to another great place to grab a bight.

Put in wiring so you can take debit cards..just saying.  A $6+ burger could have 2% built in for extra cost.

My thanks to Mr. Colfax for the restoration!

a yuppie is a person rich or poor that would say somthing like you just said.

Which is what, that you’re a sad, angry little man who hates restaurants where prices don’t end in .99¢ and have menus with ‘furren’ languages?

Note to Born in Ballard: some of us can enjoy both Redmill and a ‘yuppie’ place like Bastille. All it takes is an open mind.

So enlighten us, what restaurants, in your mind, are ‘yuppie’ restaurants in Ballard?

I consider myself a ‘yuppie’, yet I eat at Redmill. Does that make Redmill ‘yuppie’? However, I also enjoy eating brunch at Bastille, so is that place yuppie too?

Yes born some business owners do get it it seems.  I can take or leave Red Mill but they do get points for a good move.

Yes born some business owners do get it it seems.  I can take or leave Red Mill but they do get points for a good move.

No it takes only a need for trendy to like Bastille since it is not to hot food wise.   It is a very pretty place but I prefer to have good food when I eat out.

I have no problem with them not taking cards.  Their business certainly does not seem to suffer for it, either.

sad angry little man huh? you just want to web fight huh? you dorks need to calm down. note my comment was POSITIVE.  i was excited for this new business and liked the way they were approaching it.

do you dweebs talk to people like this in REAL life? or just when hiding behind your computer? get outside. socialize. learn some people skills. interact with members of the opposite sex and quit trolling blogs looking to pick fights.

hey redmill……welcome to the neighborhood and thanks for taking such care in this restoration.

You are trying wayyyyy to hard to be a snob, and you don’t even realize it.

The rest of us in the 21st century have a problem with it.

I love Bastille’s back bar and go there whenever I can. The food, however, is generic and overpriced.

Not all of us.

By not taking credit cards he can reinvest those fees into his employees and their health insurance.  Very conscientious business owner/employer.  Kudos for the path he has chosen – people over profits.

By not taking credit cards he can reinvest those fees into his employees and their health insurance.  Very conscientious business owner/employer.  Kudos for the path he has chosen – people over profits.

“You’re supposed to focus your anger at hipsters now”

Luckily Hipsters make it so easy for us to hate them, by offering up a seemingly endless  list of things to dislike about them ….