A piece of guerrilla art has appeared in the “vacant lot” (in quotation marks because it’s less of a lot, more of a lake) just east of the Ballard Bridge and south of Ballard Blocks, where the Ballard Blocks II development is slated to be built. 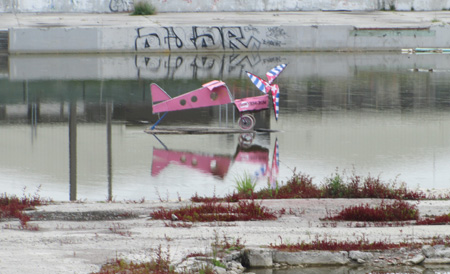 We believe this pink cardboard seaplane with a red, white and blue propeller, showed up at some point in the last few days.

This isn’t the first water feature for an undeveloped piece of land in Ballard. More than two years ago, a ‘Seagle’ appeared in a pond on NW Market Street. (Thank you Charlie and Doug for the tip!)