Ballard has quite a few car campers, people who live in their vehicles – some are parked along residential streets, others are down in the industrial area near the Fred Meyer (915 NW 45th St). With the City of Seattle’s new Scofflaw ordinance that went into effect earlier this summer, Kiro Radio’s Josh Kerns says it has become a game of “cat and mouse” for the police and car campers.

On yesterday’s Ross and Burbank show, Kerns spoke with Dave Ross and Luke Burbank about Ballard’s population of car campers. Kerns went out and spoke with several of them. He says they are made up of young families and people who have medical issues and have lost their jobs and homes. Of course, he says, there are also the drunks who run their generators all night.

Kerns says this about the living situation of the car campers:

“There was an amazing systemology, if you will, that they explained to me. They knew where the spigots were on the buildings, the businesses that close. ‘Well, he closes at 7. I can go behind there and fill up my water and wash my face at 8.’

The Fred Meyer in Ballard is supposedly very homeless-friendly. ‘They let us come in at certain times to use the microwave. So we go to the Food Bank at 11 a.m., we get our donation, and then we take it over to the Fred Meyer. I wear three layers of clothes and take I the first one off when it starts to smell, but I still have the second one. And I go to the Green Lake Community Center to shower on Thursday.’ There is an amazing structure just to survive.” 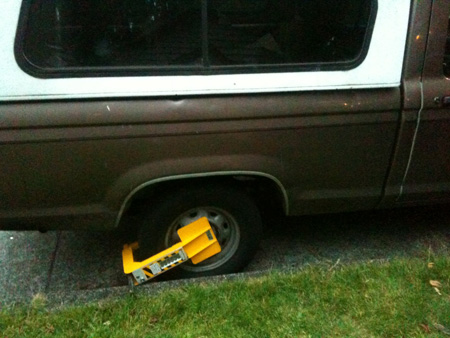 Example of a boot on a vehicle in Ballard

Back in July, the city implemented its Scofflaw ordinance. If a person has four unpaid parking tickets, they’ll get a boot. “It’s a huge challenge,” Kerns says. “Now you see this increasing game of cat and mouse, whack-a-mole. They all move in concert. They know, they look for the guy to come along and put the mark on the tire and before the 72 hours are up they’ll all switch places.”

So far, Kerns says, no one has come up with a solution on how to deal with the car campers.

The Ballard Homes for all Coalition is working on a “Car Camp Project” to create one location for several vehicles with a hygiene station. You can read more about their efforts here.