Metro Transit is finalizing their upcoming proposals for service changes in Ballard, but want to hear from the public one last time before submitting the plan to the King County Council later this spring. 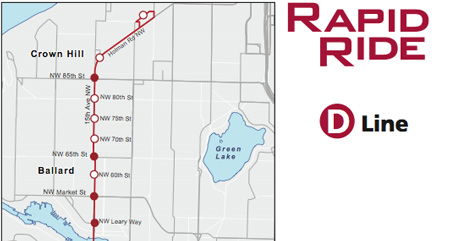 With the current set of proposals, Metro wants to make transfers easier, improve bus connections in North Seattle, and avoid duplicating service on the RapidRide D Line when it begins in the fall. But, Metro is proposing to retain some trips on Route 15 Express to prevent bus overcrowding in this corridor during peak periods. Routes 17 Express and 18 Express will also retain their current routings to complement this change.

The current proposals will launch the Rapid Ride D line on September 29th.

More than 5,000 people commented last fall, giving invaluable feedback to Metro, according to Victor Obeso, Metro’s manager of Service Development. “Now, we want the community’s help again to continue moving forward with our vision for a transit system that is efficient, cost-effective, and best serves the entire county,” Obeso says.

The public is encouraged to comment on the upcoming changes either online here or at an open house next Monday, February 13th from 6 to 8 p.m. at Ballard High School.