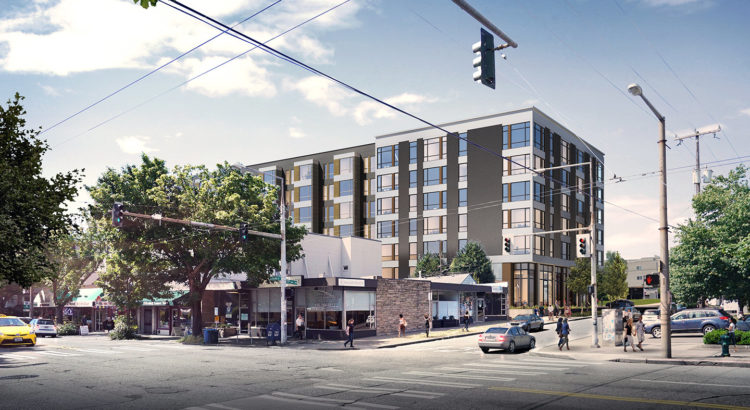 One of Ballard’s largest developments under construction is coming together on both sides of 56th St. at 17th Ave., behind Ballard Realty.

Valdok is a 7-story apartment and retail complex with two buildings across the street from each other. The Valdok I (closest to Market St.) is the furthest along — the building topped out in September — and it plans to open next summer. Here’s what it will look like: The Valdok II is just to the north, and it’s slated to open in 2019. Here’s the rendering: The architects, Clark Barnes, say both buildings “are inspired by Scandinavian culture and design and will use warm colors and wood throughout.” The name Valdok has both Scandinavian and local roots: one of the homes on the Valdok site was owned by the family of Bjorn Leo Valdok, who immigrated from Norway in 1959.

The Valdok family and their neighbors did well with the sale: the properties sold in 2016 for a combined $3.5 million.

Here’s the view looking down 17th Ave. toward Market St.: Valdok will feature 178 apartments with lots of retail space on the ground floor and on-site parking. It’s owned by LMC, which also owns Axle, the large apartment building under construction in Interbay at 3230 16th Avenue W.

The sun will never actually shine on these buildings because they will be shaded by other tall buildings across the street from them. It will be a cold, dark tunnel for pedestrians. I don’t like it.

@ Ballardite
Awesome post. Sad thing is, the “replacements” here and arriving don’t seem to care about this either, for now. They feel they’ve shown up in utopia. In a few years we’ll then have to endure their complaints about too may people and Seattle becoming just another large American city with huge problems AND we can’t even see the sun.

@Scott: There’s plenty of open, cheap land elsewhere in the state, country and/or world. Bonus: you get to stop whining about how you hate things that are different!

No building should be higher than two floors! Anything taller gives me a nosebleed. I mean, have you been to a city with tall buildings like New York? They never see the sun. Ever. It’s like living on the dark side of the moon. From what I hear.

That little cottage house on the south side, flowers and gardens in bloom one day…the next, a pile of rubble…flowers, bushes, trim fence and house smashed into debris…screw these faceless land developers and the city administration that has approved these behemoths…it’s criminal that no thought’s been given to developing these large buildings with staggered profiles that would allow light, just thought given to maximum size and profit.

Everything changes and everyone has an opinion as to whether its good or bad. Bottom line is that Seattle is prosperous and growing, usually things most people want. Prosperity & growth bring amenities like transit, restaurants, pubs and micro breweries which people usually want nearby. Unfortunately, many in the Seattle don’t believe they should have share “their” neighborhood with newcomers. When we retire next year we’ll be leaving Seattle and finally be rid of the Seattle area NIMBY’s who want to join trump in returning to the 1950’s…enjoy!

@Stanmay
Transit? What are you smoking? Transit it mostly a disaster here, and if killing the city’s culture is ok because it meant “more microbreweries” you must’ve missed all the fun back in Seattle’s heyday. Corporate lackey squares killed Seattle by allowing tech oligarchs to give wedgies to our goofy community college level city council until they got their way; then the protester kids hilariously blame Trump. This place, which once took exception to “American Style” dumb strip mall greed and expansionism, is now a sad example of why some cities abroad still have appeal: namely, they preserve their eccentricities and local flavor.

This “prosperity” is just a faceless corporate takeover by vertically integrated, transnational sweatshop tech merchants. At least have the intellectual honesty to really name it even if you’re busy buying crap on Amazon or planning your Great Boomer Escape.