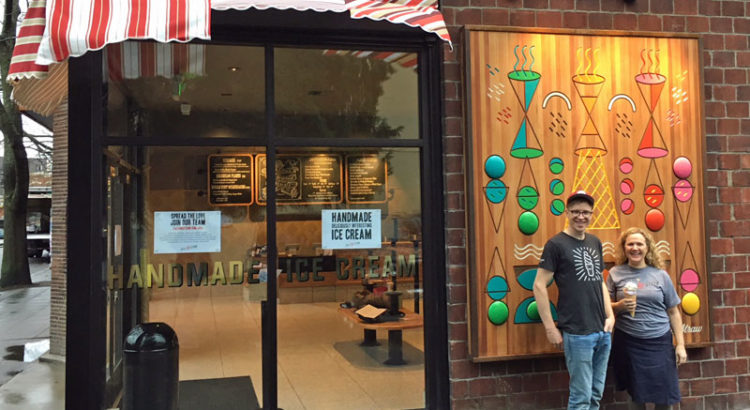 Seven years ago, Kim Malek sold her Ballard home, held a garage sale and moved to Portland. Together with some cash from her 401K, she scraped together enough money to open Salt & Straw, a handmade, small-batch ice cream shop in Portland’s Arts District.

“It’s all thanks to Ballard,” she laughs inside Salt & Straw’s brand new location in Old Ballard. Together with her co-founder Tyler Malek — who grew up in Snohomish — they’ll open for business at 5420 Ballard Ave. on February 9th. A week later, they’re opening a Capitol Hill location.

“For both of us, coming to Seattle is like coming home,” Kim said. “I spent every weekend at the Ballard Farmer’s Market. Being on this street is just a dream for me.” From its humble beginnings in Portland, Salt & Straw attracted long lines and grew quickly, adding locations in Los Angeles, San Diego and San Francisco. The new shop in Ballard is their largest so far, and in keeping with its Portland roots, it will feature new flavors created in collaboration with local artisans, farmers and producers.

“(In Seattle) there are so many people to work with and so much inspiration,” Tyler said, recalling the taste of salted caramels from Fran’s Chocolates when he was younger. “It’s like a homecoming.”

When they open, they’ll feature five Seattle chocolate flavors from the likes of Fran’s, Theo’s and Intrigue’s Chocolate, just in time for Valentines Day. This part of the menu changes every four weeks, and Tyler said there are many more collaborations to come, including a flavor from chef Renee Erickson as well as ice creams created with local roasters… and breweries.

“We want to have a hyperlocal feel,” he said.

The store will also feature Salt & Straw’s classic flavors like Double Fold Vanilla, Chocolate Gooey Brownie, Sea Salt with Caramel Ribbons and Almond Brittle with Salted Ganache — 11 in all. Prices range from $4.95 for a single scoop ($3.95 for kids) up to $11.45 for a “tasting flight” of flavors.

Just in time for spring, the shop opens next Friday. The late-night crowd will be happy to know its hours will be from 11 a.m. to 11 p.m., seven days a week

Excited to have another ice cream option in Ballard!
Is the ice cream and base locally manufactured?
What does the Tom Douglas investment group have to do with Salt and Straw?

Is it gluten free?

Do they have fudge?

Do they also have dairy substitute?

Be a real American and eat dairy.