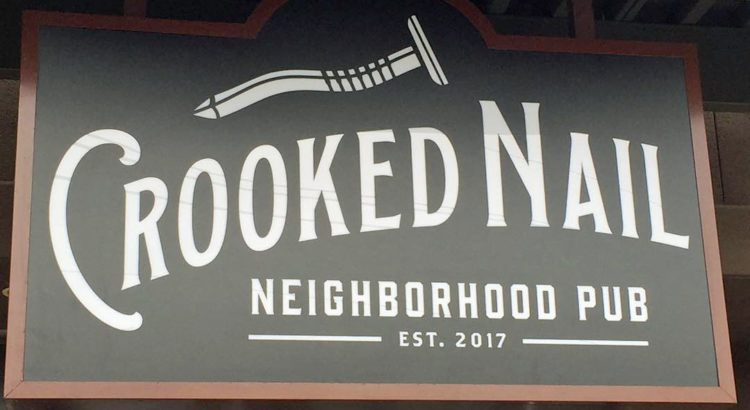 The neighborhood bar Crooked Nail, which is a bit off the beaten path at the corner of NW 56th St. and 17th Ave. NW, has apparently closed its doors for good.

The news first appeared in the My Ballard Facebook Group, and the business is not answering its phone or email. Its Facebook page has been removed.

We discovered a liquor license application for the same address for a new establishment called “Corner Shot” under the name of Kacy Fitch, co-owner of the Zig Zag Cafe in Pioneer Square. So there’s a good chance Crooked Nail will become Corner Shot, just in time for the big Valdok development to open across the street.

Neighbors in the My Ballard Group had only good things to say about the Crooked Nail, which had been developing a steady clientele since it opened last year. However the location has been challenging for former tenants over the years.

Unfortunately, not all that surprising. The owner passed away a few months ago and the place had been for sale since. Very sad.

Yeah, it’s a huge bummer. John is correct about the previous owner. Bar was doing great but now under new ownership, they’re trying a little different concept. Rumored to just be closed for short remodel, opening 3/1. We shall see…

bummer. hate to see any business go under in ballard. best wishes to everyone involved.

sorry about Crooked Nail closing. I live in one of the buildings within a one block radius and enjoyed and felt comfortable at The Crooked Nail. I had not heard about the passing of the owner. I thought they were on track to make it and especially because the density in our neighborhood is about to shoot up. Their menu was good, their prices reasonable, and their staff friendly. I was on a first name basis with several of them. Sorry it didn’t make it and I’ll give the new business a shot!! I feel passionate about supporting the small neighborhood businesses.

I thought it was a bad sexual pun anyway.

This is sad to hear, but not unexpected given the owner’s death. Their food was great, the staff was nice, and for once a business in that location was actual doing well. Hopefully the new business will be able to pick up where they left off.

The owner killed himself, tragically.