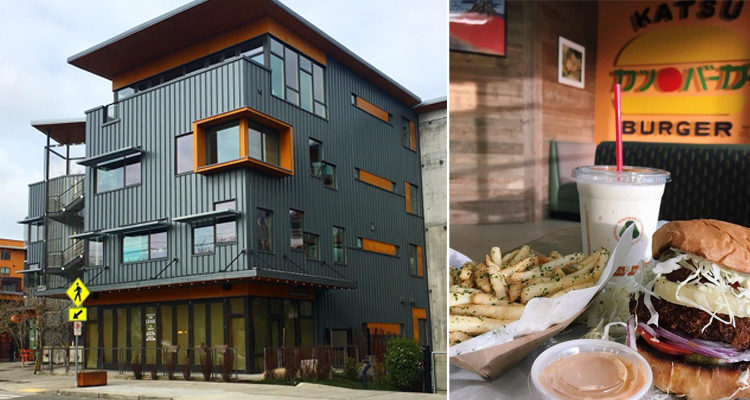 “Just got the keys!” said Katsu Burger’s Christopher Poetter in a message to My Ballard.

Not only will the Ballard location have same Katsu Burger menu, but it will also have a sushi bar, bento and “inspired cocktails.”

You may have stopped by one of Katsu Burger’s other locations in Georgetown, Bellevue, Lynnwood and Capitol Hill. The menu features several variations of its huge, deep-fried burgers, ranging from the Tokyo Classic (beef) and Ninja Deluxe (pork) to the Godzilla Attack (spicy.) Katsu Burger’s nori french fries get raves on Yelp.

Work is just beginning on the space, and Katsu Burger hopes to open by the start of summer.

Another place I can’t eat at because I’m poor and stupid.

You can be rich and stupid, Scott. I believe in you!

Huge space and off the beaten track a bit. hope they can make it work. Good luck to them!

Why can,t we have a dairy Queen or a A&W or Carl’s Jr. Like the rest of America ! Oooh forgot Ballard is a caliphat of WASP. ” white ANGLO Saxon progressive ” which is not part of Americana life style along with other communities surrounding Seattle…thanks Paul Allen to pushing hard working Americans out of not only Seattle but Northern King County and take your Sea chickens and stick it !

We’ve been longtime fans of Katsu at their Georgetown and Factoria locations, really excited to have one so close. Their food is fatal for your health but so good.

Yeah good luck Katsu. Not sure the neighborhood has become something other than another drab Belltown or Queen Anne. Remember when Seattles neighborhoods had personalities?

Why can’t we have a Walmarts and Carls Jr? Why do people make more money than me? Why do I smell like fart?

YESSSSS. Katsu Burger is fantastic, and this is a great addition to Ballard.

” Remember when Seattles neighborhoods had personalities?”

Yeah, and Ballard’s personality had sh*tty restaurants and food.