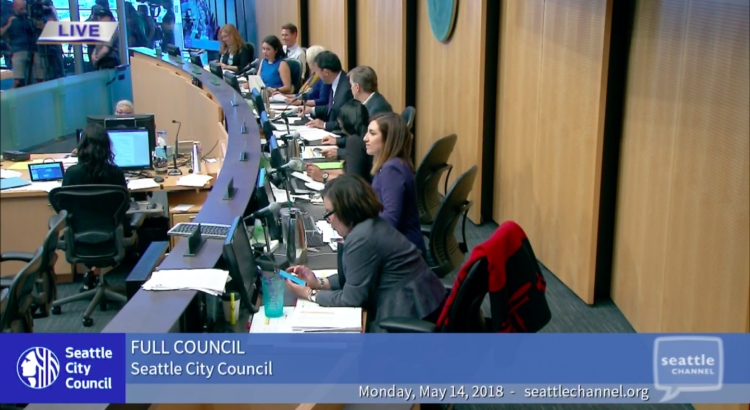 One of Seattle’s most controversial proposals in years passed unanimously in city council today — but after some significant revisions.

The council voted 9-0 to require large Seattle businesses to pay $275 per employee in taxes for housing and homeless services. It sunsets in 2023. That’s down from $500 per employee proposed in the initial head tax plan, which faced a potential veto from Mayor Jenny Durkan.

The head tax will raise $45-49 million a year, down from the $75 million a year in the earlier proposal that prompted a sharp response from Amazon and a racous community meeting.

Here’s more on the story from KOMO News and the Seattle Times.

Ah, I see Durkan decided she just wanted to be a one term mayor. Got it.

Get rid of all these knuckleheads.

Even though this is close to the Mayor’s proposal, she should veto this. A head tax isn’t necessary; clear, sensible heads are. There is a solution through collaboration, not confrontation.

Damn, now we’ll only be able to buy half the number of new bums to scatter around Seattle.

Ever think maybe the reason they voted 9-0 for this is that they took the pulse of their constituents and found out this is what the people want them to do? They got elected in the first place because they are popular. They said they would do things exactly like this, and that made them popular. This policy is popular. You guys who want to get rid of all of them are UN-popular. As in you’re going to keep losing. Also remember how you all said it was going to collapse around our ears when they raised the minimum wage to $15? Oops. Wrong, weren’t you? Lesson learned? Nope. Looks like you’re going to predict doom again, and be wrong again, and be left with nothing but your anger. It doesn’t have to be this way. Turn off the Jason Rantz and the Dori Monson. Turn off Fox New. Ignore the Seattle Times editorial page. Try a fact-based approach. This policy is a compromise and so obviously it’s far from perfect. You could criticize it for all sorts of reasons. But you will still need to get some facts and not a lot of rightwing talk radio nonsense. Look at… Read more »

No right wing commentators in my ear and what is Fox New? Also, I refuse to watch Fox News(?). My comment came from common sense, not idealism; throwing money at a problem or an issue without monitoring how it’s spent is foolish, dumb, asinine … take your pick.

Elenchos, I’ll bet you a testicle we’ll have even more bums in 5 years, while the national numbers continue their decade long decline.

Feed a stray, get more strays.

You know Simon, the only reason I have to come here is to mock lunatics posting crazed nonsense like ‘buying bums to scatter around’. Stop posting that crazy nonsense, and nobody will have to sit here lecturing you. Facts. Get some facts. Try it.

I guess that means you don’t have a testicle to spare.

Do you have any idea how creepy you sound?

Bizarro, let’s leave it alone; as a native Seattleite I’m passionately attached to my city, not to the blight that’s affecting it; I guess that must include you. Good-bye.

The Seattle City Council needs to up its troll game: since Amazon stopped construction, they should tell Amazon that the recently passed ST3 will not have an Amazon stop (since they threatened to leave Seattle), instead it will now build Ballard to UW instead, which will be built faster, carry more people than Ballard through Interbay, and will save taxpayer money. Of course, if they want to keep ST3 the way it is, they can put up even more money for more housing.

This website is great. I find a lot of useful info

Good and first-rate blog post, thanks for sharing your facts.. It’s miles very useful to me

This just out: Amazon announced they are dropping plans for selecting an HQ2 location and are now looking for a HQ1 location. Boeing recommends Chicago.
Here is a fact –
KIRO News poll – 54% Seattle voters oppose a head tax. Only 38% support it. This extremist city council has commandeered control of Seattle and is having a spending free-for-all at the expense of its taxpayers.
Here is what Starbucks said –
“This City continues to spend without reforming and fail without accountability, while ignoring the plight of hundreds of children sleeping outside. If they cannot provide a warm meal and safe bed to a five year-old child, no one believes they will be able to make housing affordable or address opiate addiction. This City pays more attention to the desires of the owners of illegally parked RVs than families seeking emergency shelter,” John Kelley, Senior vice president for Starbucks Global Public Affairs and Social Impact said in a statement to KOMO News on Monday evening.
Yet there is hope –
Republican State Sen. Mark Schoesler said he’s ready to introduce a bill to repeal the tax.

Goodbye Amazon and the tens of thousands of jobs that support them.

I agree with guest – Amazon and UW employ close to the same number of people in Washington state (not including the 40,000 UW students). Plus UW generates $12.5 billion a year in economic activity and generates $152 million in direct tax revenue on the state’s $254 million investment. Meanwhile, UW gets no coverage in the Seattle times and no love from the city or state for its employment, innovation and economic development. Amazon, in contrast hoards its taxable revenue in offshore accounts and everyone has their panties in a twirl if Amazon is “displeasured”. Giant corporations are not your friend.

@guest: Amazon announced this morning, after the head tax vote, that construction was still on for Block 18, their next large complex. Their anti-head tax threats were a bluff and the council saw through it. Everybody, especially Amazon, knows how good they have it in Seattle and Washington, especially with no income tax for their employees. They aren’t moving any time soon. And other prospective cities for HQ2 are going to see how much having Amazon in their city is going to cost them.

So a GOP senator from Ritzville is going to try to pass legislation to force Seattle to not tax itself? Wouldn’t Ritzville and Eastern Washington scream bloody murder if Reuven Carlyle tried to pass a measure forcing Ritzville to do something? Hypocritical much? Luckily, his measure will go nowhere.

And good lord that Starbucks quote! John Kelley must be a member of Next Door!

We have 3.8% unemployment, which is as close to full employment as one can get in reality. We have a $15min wage and aggressive Affirmative Action hiring practices. The fact is, if you want to work in Seattle you can work. People like Truth and Elenchos have painted themselves (haha if they could, you know, actually paint) into a corner by saying that Seattle is liberal success story but is also a woeful Dickensian (google that if it is hard, Elenchos, they might have banned his books in your school) place of exclusionary capitalist exploitation where the the poor are trampled upon. Well, which is it? You can’t make the lazy junkies work or keep or roof over their heads. Truth, It’s funny you have such a low regard for people like Bezos (hey I don’t like him either) but think the tent dwelling junkie thieves are saints. Comedy! In reality, the city has no idea what to do with the massive population of defectives and simply taxes biz to pay for vague, ineffective “solutions”. These people are all narcissist hypocrites. Sawant’s book is on sale ON AMAZON. You can’t make this stuff up because if it were fiction no… Read more »

The debate has most often focused on Amazon, but there are roughly 600 businesses that will be affected, some more than others. One of those is the iconic Dick’s Drive-In.

“That’s what’s really frustrating, this isn’t about Amazon at all,” said Saul Spady, whose grandfather founded Dick’s back in 1954. “This is a tax on high-volume, low-margin businesses, like restaurants, and that’s where it’s going to put the most pain. And it’s making restaurants like Dick’s Drive-ins think really strongly about do we make our workforce more efficient, do we give less money to charity, or maybe we just don’t be a business in Seattle.”

So long Dick’s Deluxe. The unintended consequences of this decision are going to sting.

@Sockpuppet: Your comment shows your your complete lack of grasp on reality. We’ve been over this before and I understand you have trouble comprehending facts, but provide: addiction treatment, mental health services, shelter and job training and you’ll see the homeless problem dissipate.

And by all means, please tell me why Ritzville should dictate tax code in Seattle.

But I understand that you’re just a mentally ill individual having some sort of breakdown on a neighborhood blog comment section, so I’ll understand when you don’t respond with facts, sources or even a well thought out response (you never do). I will, however, direct you to the King County Mental Crisis hotline. I’d recommend you give it a call: 206-461-3222. You’ll be better for it!

@Truth
I’ll take your lack of a substantial rebuttal as an indication you have accepted the reality that your stance is defeated.

YOUR TAX DOLLARS AT WORK:

“A drug deal was going on in the alley, when a suspect pulled out a pistol and demanded money. The victim started to leave and was shot several times.”

But perfectly fine for you right wing nut jobs to use it instead of making well thought out rebuttals with facts and sources…got it!

YOUR TAX DOLLARS AT WORK:

*pats Sockpuppet on the head* Sure thing buddy, whatever you say… Did you call the mental crisis hotline yet?

@truth. Ok, I’d ask ST to ask how much money we’d save, given Amazon’s apprehension, to not have a stop (but keep it as possible infill station like Graham St or 130th St).

@truth…. well, have you ever been to Ritzville? Wonderful little town. And the reality of economics is what happens in Seattle doesn’t stay in Seattle. Ritzville is in the middle of wheat country, and most of the wheat grown in Washington ends up in the grain silos just below Magnolia. BNSF trains deliver that wheat. The Port of Seattle and longshoremen/women (union jobs) load the grain. Wheat farmer in Ritzville gets paid and guess what? Spends money on Amazon, REI, a law firm in Seattle, a new tractor that may be imported through the Port of Seattle. So what happens in Seattle impacts Ritzville and vice versa. To think we live in little silos all over the state, with no one silo impacting the other is naive. We are not only a global economy, our state economy is very connected. Having thriving businesses in the major city of our state is critical to every resident of the state. If prices rise because of the head tax or unemployment increases, it will also impact the wheat farmer in Ritzville. Last, homelessness is also a state wide issue. The state has far more resources and tools to help with addiction, runaway children… Read more »