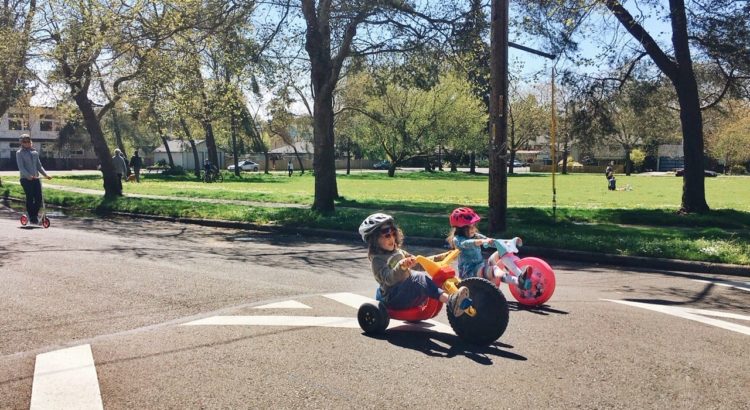 Seattle now has 27 miles of city streets closed for recreation, and the City has launched a survey to determine which streets should be permanently closed to thru-traffic.

Last month, Mayor Jenny Durkan announced that 20 miles of Seattle’s Stay Healthy Streets would be made permanent. Before determining which streets will be permanently closed to thru-traffic, the Seattle Department of Transportation is collecting feedback to see how residents are using the current closed roadways. They’ve created an online survey to gather input, which will be open until July 15.

The current Stay Healthy Street in Ballard is on 17th Ave NW between NW 58th St and NW 89th.

The streets that are chosen for permanent closure will have signs installed at each intersection. In a blog post, SDOT says they want to work with each neighborhood, “to understand how the streets could become part of the neighborhood character.”

“The survey will inform the public engagement process and our goal of centering equity. If we truly want Stay Healthy Streets to be welcoming for all communities, then ‘we’ must include everybody. It means understanding cultures that have existed in the neighborhood. It means valuing everyone’s voices and finding ways to include them. It means everyone feels safe traveling on our sidewalks and streets. It means recognizing racism and becoming an ally. ”

If you live on a Stay Healthy Street and get sick do you need to move? I wouldn’t want to break the rules

Thanks for the chuckle!

Good stuff! In a recent SDOT study they concluded 95% of all accidents happen within 25 miles of your home. Umm, so I’m moving.

I mean no ill will when I say you have a sick sense of humor!

Gonna be great for property values!

Maybe these privileged folks will give that capital gains to a worthy cause to relieve their guilt? Last time I walked down 17th I saw lots of spot-on, moral-primping, political messaging so I’m sure they all have their check books ready to help out the oppressed.

u r so filled with HATE
why do you hate
america?
accept jeezus christ as your savior
embrace god’s glorious LOVE
pray for forgiveness

durkin is a colossal failure – a closeted Fascist –

Permanently closing these blocks is a head-slappingly good idea. As in, why did we always just presume that every block of every street has to be open to motor-vehicle through traffic? Dare we suggest that *most* residential blocks should be limited to resident and local delivery traffic?