More than a hundred neighbors who live near the Calvary Lutheran homeless shelter say they want sex offender background checks or the shelter must be relocated or shut down, according to newly-released minutes of a meeting held with SHARE and Our Redeemer’s Church last week. Last month, neighbors were alerted by the Sheriff’s Department that […]

Over the weekend, a Level III sex offender was removed from the SHARE homeless shelter at Calvary Lutheran church. Pastor Steve Grumm of Our Redeemer’s Lutheran Church, which oversees the Calvary property, told us today that he is “more than deeply saddened by this.” “It’s not only a surprise, but an alarm,” he said. Grumm […]

At the Ballard District Council meeting Wednesday night, the Compass Center previewed their plans to build a facility for the homeless at the now-empty lot at 1753 NW 56th St. The 7-story building will feature 80 units of permanent housing for both homeless men and women. (Earlier plans were for a women-only facility.) “We have […]

On May 30th, a group of homeless men moved into a SHARE shelter at the vacant Calvary Lutheran Church in Ballard. As you may remember, it was a controversial addition to the neighborhood. A task force comprised of neighbors, SHARE and members of Our Redeemers Church was set up, and My Ballard received an email […]

About 80 neighbors gathered at Calvary Lutheran Church in Loyal Heights Wednesday night for a community meeting about the SHARE homeless shelter that’s moving into the building on May 30th. Our Redeemers Pastor Steve Grumm and a half-dozen SHARE members, with the help of a moderator, explained the shelter’s ground rules and fielded a wide […]

The congregation of Our Redeemer’s Church voted Thursday night on whether to open a SHARE homeless shelter at the vacant Calvary Lutheran Church in Loyal Heights. The results will be revealed to the congregation on Sunday. After the two-hour meeting, Pastor Stephen Grumm told us the vote was passionate, fruitful and honest. “There were lots […]

While we were attending Saturday’s clean-up event, a concerned neighbor took us on a tour of “the Jungle,” an overgrown strip of land between Ballard Ave. and Shilshole along 22nd Ave. She told us the Jungle is a hotbed of drug use and a popular homeless hangout, especially at night. We didn’t see any homeless […]

The congregation of Our Redeemer’s Church is planning to vote on whether to allow a controversial SHARE homeless shelter move into Calvary Lutheran Church without sex offender background checks, several neighbors tell My Ballard. They said they were informed of the new development by Pastor Steve Grumm over the weekend while they were helping church staff spruce up the grounds around the vacant Calvary Lutheran building (below) in Loyal Heights. Neighbors say the congregation-only vote is scheduled for May 7th. 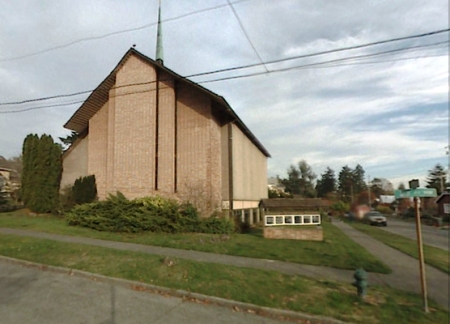 We spoke to Pastor Grumm this evening at home. “We’re not going to share any information,” Grumm said, explaining that the church had decided to stop talking with the media until they have an announcement in “a week to 10 days.” He refused to confirm a report posted a few hours earlier that quotes the church’s own spokesperson confirming the vote. “What the situation is today changes tomorrow,” he said. “Everything now is conjecture.” Grumm said the church is still “in the midst of a conversation” with neighbors….

Earlier this week, SeattlePI.com reported that Our Redeemer’s Lutheran Church had decided not to host a homeless shelter at Calvary Lutheran Church because SHARE/WHEEL refuses to require sex offender background checks. This was news to us, so we contacted Our Redeemer’s Pastor Steve Grumm for a confirmation. Today he told us that no decision has […]

Several readers have posted in the forum about these tents along Shilshole Ave. near 24th Ave., near the old Yankee Diner. My Ballard reader Mymble contacted SPD about the tents. “Officer Haag, SPD, emailed me today to say he has contacted one of the groups using one of the large camping tents,” writes Mymble in […]