Demolition crews leveled the old Denny’s landmark in June to make room for a condo-retail complex called “Market Street Landing,” which is still working its way through the design review process.

Meanwhile, two other buildings remain on the property at the corner of 15th and Market St. Some of you have asked us when they’ll be demolished, so we called the development company, Rhapsody Partners, for an update. They told us the current timeline has the demolition scheduled for sometime in the first or second quarter of next year (January to June). 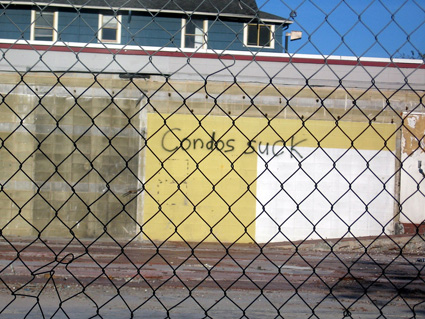 In the meantime, the buildings attract the occasional graffiti scrawl, despite the chain-link fence that surrounds the lot. Photo courtesy of OhNobody.