Ballard goes to Hollywood – My Ballard Skip to main content 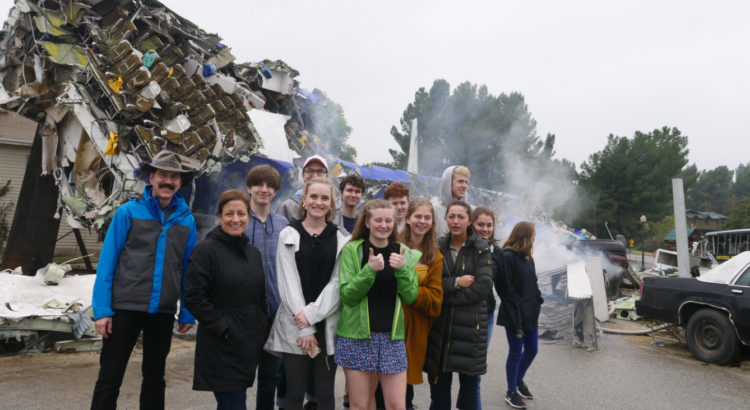 Fortunately that’s not the plane they took (above in the background), but a disastrous scene at the Universal Studios backlot. They also visited Warner Bros. and watched a multi-camera shoot of “Mom” with Allison Janey, and they chatted with writer/producer Jason Cahill (Writers Guild of America award winner for The Sopranos).

The trip included visits to Chapman University, Emerson College, Loyola Marymount University and USC – all colleges ranked among the best film schools in the country.

One of the highlights was meeting up with alumni from BHS’ filmmaking program: writer Brendan McCarthy (BHS ’04, NYU ’07) who was nominated this year for a Writers’ Guild of America award for his work on Grace and Frankie; production manager Mixtli Zavaleta (BHS ’07, UW-Seattle ’11); and writer/director Jesse Harris (BHS ’04) who has a second feature film, Borrego, currently in development.

“It is exciting to teach a program long enough to see graduates gain traction in their careers,” explains Matt Lawrence, who heads up the BHS filmmaking program.

Great stuff. Just remember: Don’t ever give up… and (for the writers) keep writing… every day.

What a cool opportunity!

As a film school graduateX do yourself a favour and don’t go to school for film. Save that as a hobby/backup. Go to school for something more employable, especially if you want to stay in the PNW. Not enough jobs for the amount of people with high hopes.

I think these students deserve this opportunity and have done a great job. I have never been an exemplary student and can only dream of such things or scholarships. The biggest problems I face are during exams and writing assignments. In such cases, I click for more info here, and thanks to the reviews I can find a service that is ready to help me. Because, the tasks can be difficult, and not always possible to cope with them on my own.