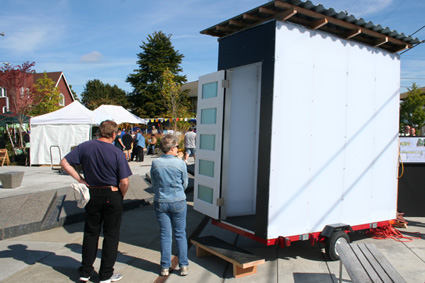 Here’s the first hygiene station, “Rover 1,” which was built with the help of Sustainable Ballard and UW architecture students. 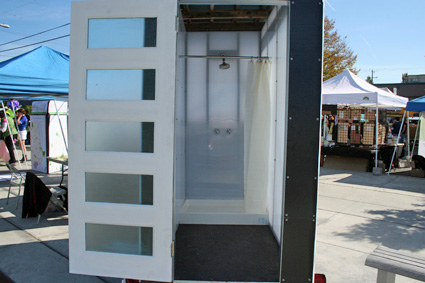 It’s essentially a traveling shower with a sink and toilet (to be installed). 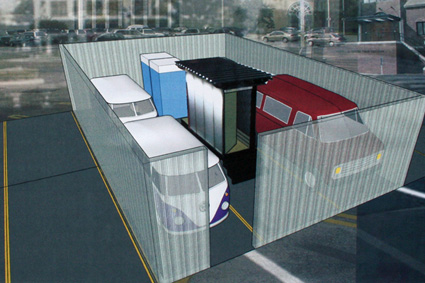 Here’s an artist’s rendering of a homeless car camp. The fence would pull together and lock at night. The hygiene station would provide light inside. 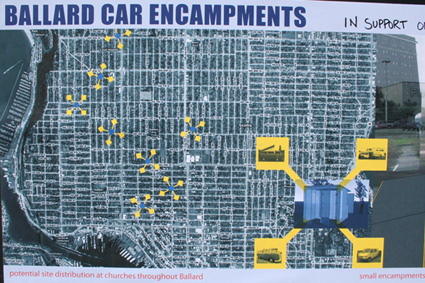 Some Ballard residents wrote comments in our earlier story saying they’re worried where the camps will be located and the security of the surrounding neighborhood. This chart, posted at the festival, illustrates possible locations in church parking lots throughout Ballard (each location is made up of four dots). But no locations have been decided yet. Even the Our Lady of the Redeemers Church, which was floated as a possible site, said they would hold community meetings before considering allowing a car camp in their parking lot.

As for security, BHAC says car campers “will go through a screening process prior to being allowed to park at a host site.” And an outreach worker will visit each site on a regular basis. We’ll keep you updated on this story and let you know when the first location(s) are selected.