Updated: Friends gathered in the rain Sunday evening to pay their respects to three young lives lost in a tragic accident. Spenser Millard, 19, and Kellen Jones and Mike Turner, both 20, died when their vehicle smashed into a pole in a restaurant parking lot in Ballard. 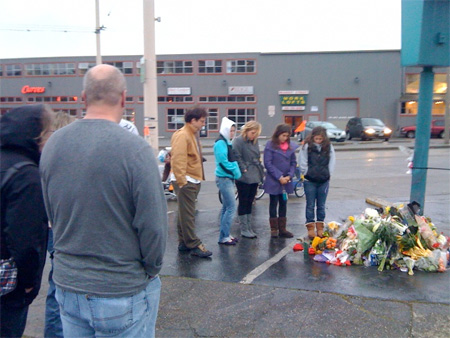 “This is horrible,” said Mike, whose son is a friend of one of the victims. “It’s really going to shake this community up because all three boys are from Ballard.” Friends say the three are 2008 graduates of Ballard High School. Millard and Jones played football there and later helped coach the junior squad. 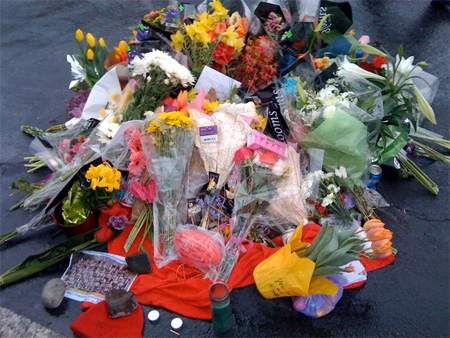 “They were electric,” said JB, who said he coached with them. “They were both great guys. I miss them.” Friends left flowers, photos, notes and a football at the base of the pole where the car collided early this morning. “It’s so sad. They were really good, really good kids,” said Laurie, whose sons knew all three of the victims. “All of the kids seem to stick together. They were a tight-knit group.” 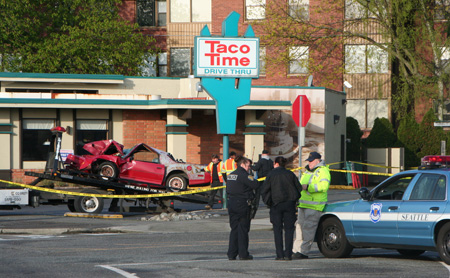 Police say a 1986 Pontiac Firebird with four people inside was speeding westbound on Market when it struck the Taco Time sign just after 4:30 a.m. In addition to the three young men who died, a girl in her mid-teens was transported to Harborview Medical Center with life-threatening injuries. Police say the girl was sitting in the backseat behind the driver. 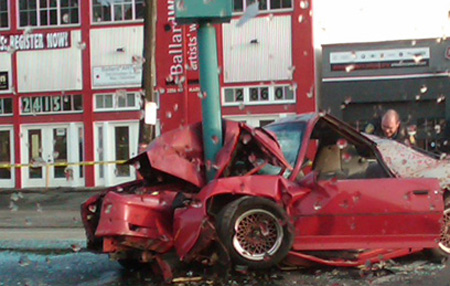 The Taco Time sign, despite absorbing the full impact of the crash, was still standing. Police are still trying to determine who was driving and if alcohol was a factor. (Above photo is courtesy of My Ballard reader Kim.) 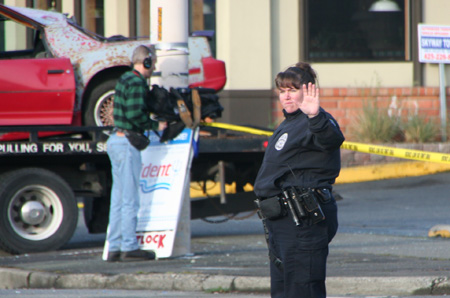 One woman who lives near the accident scene said this intersection is particularly dangerous, especially for speeders and pedestrians. “This intersection sneaks up on people,” she said. “I hear tires screeching all the time.” 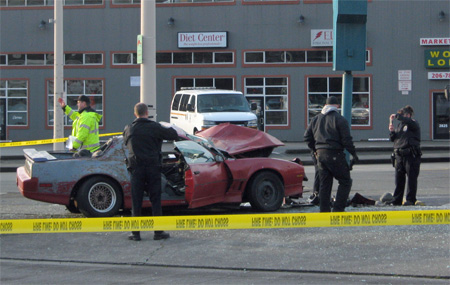 The Traffic Collision Investigation Squad detectives took photos of the accident scene for several hours. The car was driving on a smaller spare tire (see above), but it’s unclear if it contributed to the high-speed accident. The Seattle Times reports that the victims loved muscle cars and planned to take them to the racetrack this summer. (This photo is courtesy of Robert Strauss).

Sorry to see this news.

this intersection is even worse for pedestrians.

the crosswalk between taco time and the liquor store is a deathtrap—cars NEVER slow down going westbound on Market.

This is another senseless waste of life. I encounter a driver speeding through Ballard every day, and was nearly hit yesterday. We need speeding enforcement in this densely populated area.

Amazing to see the sign is stil upright..! I heard this around 4:45, the engine wind-up and crunch, but never any tire squeal. “Still trying to determine…if alcohol was a factor”..?

I walked down the hill to look after I saw all the lights and heard the sirens following. I could see the car wrecked, but not from the angle of the picture above. At least no other people or pedestrians were hurt. Wow, what a nice gift those kids gave their families to wake up to on Easter morning.

Ugh… I know this car. Seen it in neighborhood but can't place. Tragedy for all families involved regardless the circumstance. =|

That is one helluva sturdy sign. Reminds me of the Mythbusters trying to split a car in half. The car must have been going pretty fast.

Awful. So sad for them and their families. Camaros and other retro-muscle cars have such high death rates. It is young men + very fast car with attitude + handling not caught up to the power + doesn't crash well = lots of bad outcomes. Add a dash of alcohol and of course it is even worse.

Don' take this as callous, and they didn't deserve the horrible cost, but driving that fast on residential streets at any time of day is beyond reckless and it is lucky they didn't mow down a mom up early walking a baby or something.

A very bad 24 hours in Ballard, with another serious crash on Holman Road yesterday.

Hmmm… it's the liquor store that I think makes this intersection so bad, but that wasn't the case here. Shame about the accident… glad no innocent bystanders were hurt or killed. Summer traffic is about to start and usually that means a lot of speeders. That car must have been going pretty quick. Plus it was fully loaded so it would have had ~800 Lbs of just passengers.

This intersection is dangerous for “speeders and pedestrians?” The intersection is dangerous for pedestrians (as well as all other users) because of the speeders. I continue to be saddened that, despite tragedies like this, society doesn't take speeding seriously as a danger. As bad as this is (and I don't want to sound dismissive of the loss of life here) it could have been so much worse if the car had struck another car, a pedestrian, or a house.

whoa, that is some serious wreckage.

my sympathies to the families dealing with this on a sunny easter morning.

During our Church service this morning, several people began buzzing about something. Turns out the news about the accident had reached a couple of classmates of those involved. What a terrible tragedy! My prayers go out to the familes.

This is not the first time TT has been hit, its at least the 4th or 5th time I can remember. You got to question the logic of placing a liquer store at one of the most dangerous corners in the city. Funny how the metro buses cause most of the close calls around there by stoping for extended periods of time plus it dosent help when the buses cross the centerline every time they drive that street and 32nd forcing traffic coming in the opposite direction to move to the right. Metro wasnt the cause of this one, but they do cause many wrecks and near misses around the city.

so wait. the liquor store is at fault? I don't follow your logic.

Guest
Pray for them

This is so sad. People shouldn't judge. I pray for the Parent's , Freind's and Loved ones of these young adults .

Why can't you follow that? Have you seen how the driveway is positioned in relation to that goofy intersection? You can't see around the cars parked in the street when you leave the liquor store, and also have to notice 3 different directions of traffic at the same time. It sucks.

peace to their families on this difficult day…

Lets wait and see what the Blood alcohol level is. Then we can about the gift to the parents. Even if the B.A. is normal this guy sure was not doing the speed limit. I agree with KF so far.

One look at those wheels tells me this is not a Camaro.

It is a tragedy, to bad it could of so easily been avoided.

Does anyone know the names of the people involved?

I don't think anyone would have been exiting the liquor store parking lot at 4:30 a.m.