A Ballard man came home to hear a strange sound coming from his kitchen yesterday evening. “A squeaking something in the vent above my stove,” Dusty said. After getting out the flashlight, he discovered a baby squirrel had crawled down the fan vent and taken up residence next to the warm light inside. 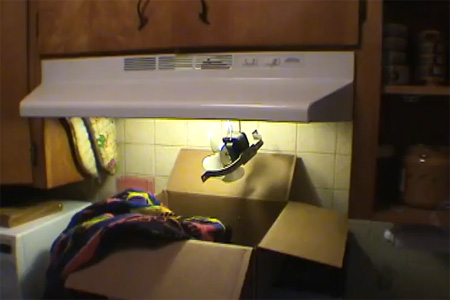 Dusty posted a message in the My Ballard forum under the name Dweezil, asking for ideas. “Trying to disassemble the fan above my oven to pull a baby squirrel out. Anyone know who to contact? Not the exterminator.” Within a few hours, My Ballard readers had furnished links to animal rescue sites while he gave a play-by-play description of the rescue. “I managed to get the fan off. Just trying to lure him out now,” he said. 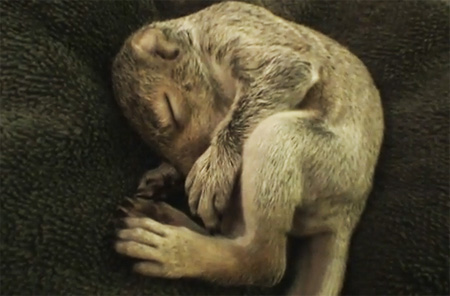 After wrestling with the fan and detaching it from the wall, he poured the little squirrel into a box, recording video of the cute little creature. “Just wondering who to take him to,” Dusty wrote in the forum. After reading the wildlife rescue sites, he had a plan. “I’m about to put him up into a tree and hope that momma will rescue him,” he described on the video, zooming in on the squirrel. “It’s kind of hard to let go of this cute little bugger.” 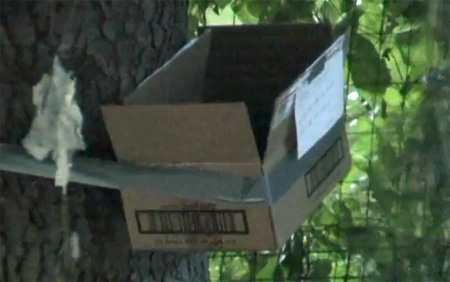 So up he went. “I put the baby squirrel in a box, taped it to a tree, put a sign on it, ‘Don’t Disturb,'” he explained while quietly videotaping from his back porch. “Just waiting for momma.”

Here’s the video to watch what happens next. Click ahead to 5 minutes and 54 seconds to see the heartwarming ending in the tree.

Best ever!! Rescuer deserves a medal!!!

We raised a baby squirrel in Ballard, rescued by my brother on his paper route. Mom carried it in her apron pocket. Would go on camping trips with us.

A smell a Pulitzer!

great rescue, but I really doubt putting it in a box taped to a tree will encourage the parents of this squirrel to re-embrace him.

keep us posted. I'd like to hear if a hawk or illiterate crow goes after it.

Did you watch the end of the video?

Good on ya, Dweezil.

I wonder what the response would have been if instead of a baby squirrel a baby rat had been found and rescued. Why all the love for what is an introduced species that is out of control in the urban environment, digging up our gardens, eating from our fruit trees, etc? Oh, but it's so cute and warm and fuzzy!

Sweet story. Mama squirrel certainly rescued her baby quickly! I recall we did this once with a baby rabbit we found lost in the middle of our yard–we didn't duct-tape him in a box to a tree, of coure :) we just took him in overnight to keep him warm, put him back in the garden the next day (no hawks where we lived), then each found a window in the house to watch from. It took 45 minutes for mama rabbit to carefully, slowly approach her baby, but then she covered the last 6 feet in 2 hops and then the pair leisurely hopped away into the bushes.

Enchanting video! Thanks so much for sharing your experience!

it's a rat with a tail, people. They're vermin.

Every species has a purpose. Even you. Great story. I can't believe how big the little guys back feet are! Can you imagine birthing those??

Is it an Eastern Gray? It might be a Western Gray.
Don't forget you are an introduced species as well.

I think that is the sweetest – selfless – mindful thing someone could do! Good on you Sir. May you have many blessings your way.

I had this same thing happen but with a bird. I could hear the poor thing trying to climb back up the exhaust tube to get back out. I eventually had to cut my way through the thin metal exhaust tube, pull the bird out and open my front door so it could fly to freedom. The sad part of the whole process was that I found a couple other bird skeletons at the bottom of it. So this had been happening repeatedly. Really wish apartment buildings were required to put screens over the exhaust outlets.

I love this so much!

So Troll, are you telling us that you have a tail…and some horns maybe? Jerk! If you are truly a “homelessdude” Its no wonder why! Folks that are bitter, smart ass jerks, who are unable to see the beauty of special times like this, are the same people that live crappy lives. Go figure!

Wow, you made it to the Seattle Times. :)

Great job by the rescuer! I agree, he deserves a medal! Great story, thank you for sharing!!!

That was very kind. What a beautiful little squirrel. Loved the ending. Yoink and up it went. Thanks for posting.

I came home one early fall day and found an even younger and more hairless squirrel curled up in the living room carpet. My cat, and two dogs, the alpha of which was a vicious little terrier were just lying around on the couch and the mantle. Took care of the kid overnight (the humane society recommended ensure!) and then took it in the next day (it had a little scratch on the belly….).

Very adorable, and this is a very good person.

just don't buy into it.

i'm pretty sure humans are doing a better job screwing up the environment. although, it sounds like you're a little more concerned about how good your garden looks. and yes, i understand the damage that can be done by an introduced species. Oh, i have a great idea! why don't you look for a sterilized little island, away from any living animal, so you can have a fabulous garden!

Yeah, totally. Humans were only 'introduced' to the americas 16,500 years ago.