A 100-foot vessel from the early seasons of the TV show Deadliest Catch burned for more than an hour along the Ship Canal early this morning. 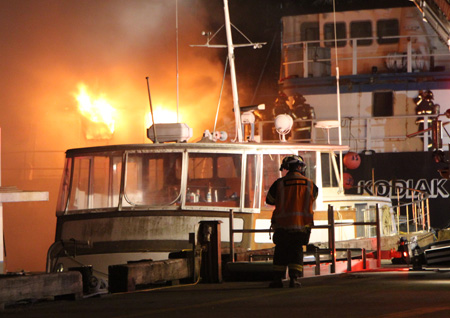 As we first reported on My Ballard, nearly 100 firefighters battled the three-alarm blaze at a dock along the Queen Anne side, both from the dock and on the water. When fire crews arrived at 1300 W Nickerson St., they discovered the Arctic Dawn engulfed in flames, sending a huge column of smoke across the water into Ballard. The only person on the boat, an engineer, escaped the flames unharmed. There were no reported injuries. 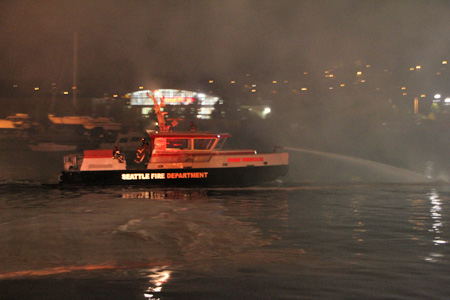 The Seattle Fire Department’s boat along with a vessel from the Seattle Police Department’s Harbor Patrol fought the fire from the water. Divers stood by just in case any firefighters fell in the Ship Canal. 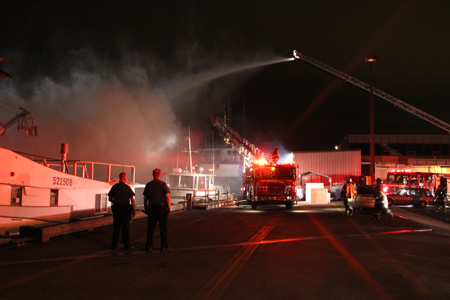 A huge contingent of firefighters approached the fire from the dock, boarding the Lady Kodiak to gain access to the Arctic Dawn, which was docked right alongside. Fire crews were able to keep the flames from spreading. 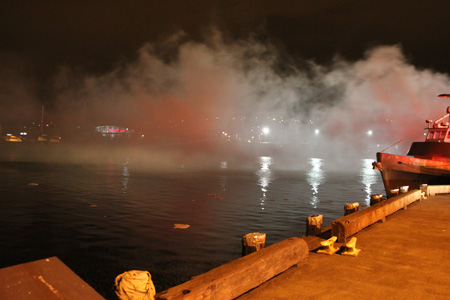 The fire sent a huge column of smoke across the Ship Canal, blowing it into East Ballard (you can barely see Fred Meyer in the background). My Ballard tipster Silver was on the Ballard side of the Ship Canal near the Fred Meyer when the fire broke out. She says the air was thick with smoke, like a heavy fog. We smelled smoke in the air as far north as 70th St. 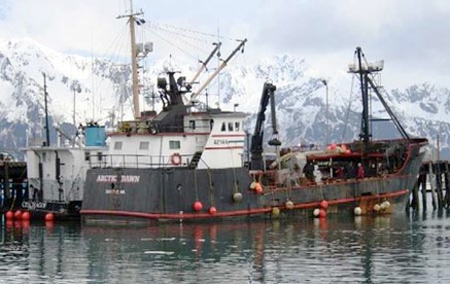 The Arctic Dawn was featured in parts of seasons two and three of the Discovery Channel’s Deadliest Catch. We spoke with the boat’s skipper while he and his engineer watched the fire burn. “We just got back from Alaska on the 7th,” he said. “All our stuff, our personal effects are still on board.” He said he didn’t know the cause of the fire, and it’s too early to estimate the damage. 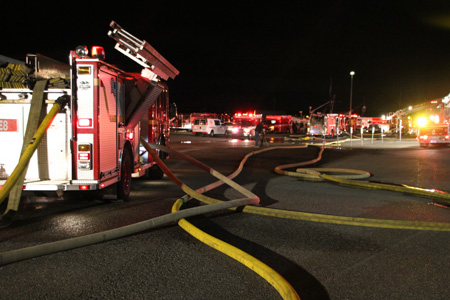 “Any ship fire is difficult,” said Seattle Fire PIO Dana VanderHouwen. “We ran extensively long hose lines to get out to the vessel.” The fire was dispatched at 1:53 a.m. and was officially put out at 3 a.m., although firefighters are remaining behind to watch for hot spots. We updated the story throughout the morning here online and on Twitter — in our nearly three years of covering news in Ballard, it was the largest fire dispatch we’ve seen.

The Department of Ecology responded to keep an eye out for oil — none has been spotted — as well as biodegradable foam, which was used to fight the fire. Firefighters say it doesn’t appear the vessel is listing at all. The cause of the fire is under investigation. (Thanks Silver for your help!)

Update: See photos of the fire damage on the Deadliest Catch boat

Based on information from the Seattle Fire Real-Time 911 Website, they have considerable units on scene. Fire department has the fire out on the top, fire crews are heading into the ship.

I just got home and turned on the scanner. Fire personnel are saying that the primary search of the vessel Kodiak is all clear.

I’m up on 65th near 8th and could smell an acrid burning odor before the sirens started. And the sirens were constant for about 15-20 minutes. Hope everyone’s okay.

There is sooty fallout from the smoke. My friend got soot all over his face just from standing across the canal from the fire for just a few minutes.

“Secondary search on the vessel Kodiak is all clear.”

Silver -Glad your up – I can see it and was worried. Thank you for filling us in.

I was walking up to my house on Nickerson and watched as 4 Fire trucks zoomed past us. There is hefty man power on this job.

They just assigned 4 additional units over to the location.

After taking a look at myself in the mirror, I’m all sooty too! That was just from grabbing that photo! Keep your windows closed if you are downwind! Even if you’re not downwind!

I saw it as I came across the Ballard Bridge. First the great plume of greasy black smoke and then the huge flames coming out of the ship. It was pretty stunning!

Most of the units being called to the scene now are to replace the crews that have been on the fire from the beginning.

“All fire is on the superstructure. We will be attacking it from the stern.”

I think the involved boats are Bering Sea crabbing vessels from the Deadliest Catch TV show.

65th and 11th here and I caught the smell about an hour ago and thought something electrical was on fire in the house, until I heard the sirens…

Thank you for posting this…very scary to hear so many sirens!

Nearly your neighbor and yes, the smell was terrible and then the endless sirens! Glad I saw this now I can rest easy… if only the neighbors’ party would shut up!

My daughter and I could smell smoke coming in through a window at our house near 76th and 8th. My daughter was a bit worried, so we went out looking for what was causing the smell and ended up seeing the smoke and TONS of emergency vehicles, but we missed the fire itself.

Great first coverage on this incident – NONE of the local news media has postings yet.

we are on 62 and 11th and thought the same thing. We went outside and saw the smoke. Then worried half the night about a poor family. I am glad to see know one was hurt. Heard scirens for at leat 1hr and a half.

Thankful my dad and crew are ok!

When this happens one can look at insurance fraud, this happens in AK all the time when one had a bad season.

For your information, thats not what happened! And no it doesnt happen in alaska all the time! And i didnt know you could have a bad season when all you do is tender/transport fish.

D. Sanchez unless you are from alaska and fished all your life maybe you would know a little more about the fisheries and know to not assume things especially when you dont have your facts straight you would then know to let people do there job before you put your two sense in. For your info this boat was company owned and didnt have a bad season for we were transporting fish therefore there is no reason as you say to have an intentional mishap!