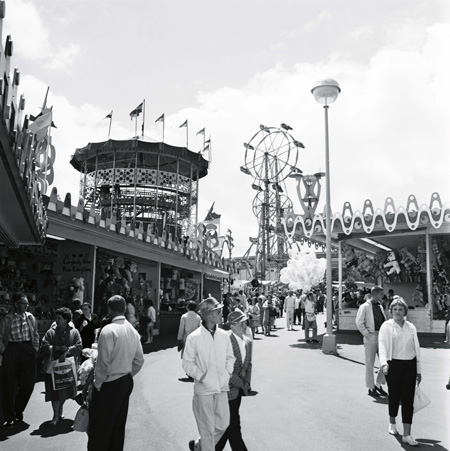 The authors of the new book, “The Future Remembered: The 1962 World’s Fair and Its Legacy,” will give a free slide show presentation at 7 p.m. 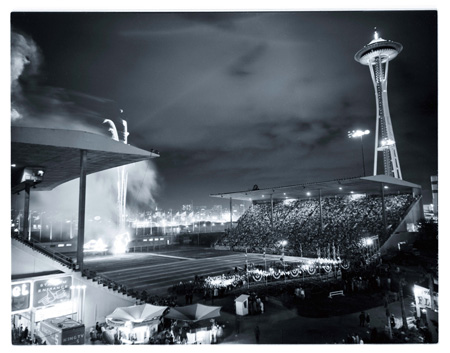 The closing ceremonies.
From page 197:

Beginning of the End As evening drew near, many fairgoers made their way to Memorial Stadium. News reporters had already been given scripts of the closing ceremonies, written by Public Relations Director Jay Rockey and Special Events Assistant C. David Hughbanks. On headsets, Hughbanks and Operations and Services Assistant Mindy Kobbervig began issuing directions to the backstage crew. Live television coverage was starting, even before sundown. Soon 13,000 people filled the grandstands, and thousands more watched from the small hill west of the stadium. At 5 o’clock, the World’s Fair Band, led by Jackie Souders, took to the field.
The Seattle Police Department drill team performed precision maneuvers. Then came the marching bands of every high school in the city, drum majors strutting and twirlers tossing their batons into the darkening sky. Dignitaries representing the fair, city, state, congressional delegation, and every nation that had participated in Century 21 were ferried onto the field in Electricabs (electric pedicabs), and they gathered on a platform at the west end of the field. Metropolitan Opera star and Spokane native Patrice Munsel sang “Around the World in 80 Days.”

Committed to History Joe Gandy stepped to the microphone and told of the great achievement that was now ending, noting that although the fair would fade into memory, it resulted in “a new cause, a new era of great dreams and great realities for our Pacific Northwest.” The audience joined in silent prayer. Mayor Clinton then spoke of the city’s pride in taking part in the closing ceremonies of “our world’s fair.” At the east end of the field, a bank of fireworks displaying Mount Rainer, a fir tree, and the Century 21 logo lit up.

Authors Paula Becker and Alan J. Stein will have the book for sale at the event. (Photos courtesy the Museum of History and Industry.)

It started going downhill at that point however made them reclaim characteristics. Be that as it may, I have been somewhat exhausted with this season. I am extremely faithful to the characters and character advancement is so essential to me. That is not the situation with numerous fans.
https://writemyessaytoday.net/

When i have using first time the latest windows than i have always get search that How do I sync my settings in windows 10 but my when i have open the guidelines of the windows my all dought goes to be clear.

This is essentially a summary https://eduloh.com/research-proposal-writing-services/ of what you are planning to explore and how. Composing is more complex than it seems, as you ought to make the right impression on your potential supervisor. A badly written document may cause your project to be dismissed right away.

OnlyFans is a social media platform that has millions of users https://onlyfanshack.pro