Ryan Minvielle is getting a mid-winter break thanks to one of the coldest winters Alaska has seen in years. Freezing temperatures, relentless snow and ice have forced many vessels to stop fishing until the weather warms up.

Minvielle, a deckhand for the Pacific Mariner and graduate of Ingraham High School, said that while being back in Seattle is nice, he would rather be fishing for Opilio crab. 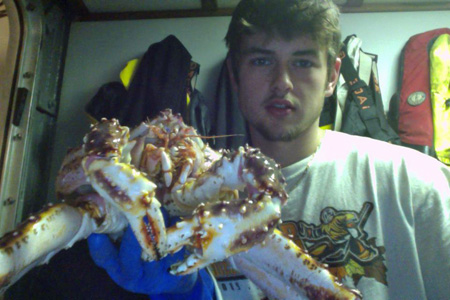 Ryan Minvielle with a catch during the last King Crab season

“It cuts into our time after fishing,” he said. “By now we probably could’ve gotten at least one or two trips in. Our boat holds about 200,000 pounds of crab. We would’ve been half way to a million [pounds] by now.”

Minvielle’s boat is currently tied up in Dutch Harbor, Alaska. He says that the bad weather allowed for some maintenance work to be done, so they’ll be ready to fish as soon as the ice is gone.

“We put in some new conveyor belts so we don’t have to push the crab to the tank chute,” he said.

While Minvielle is back home in Seattle, Brandon Smotherman—a deckhand for the Cascade Mariner who is also from Seattle—isn’t so lucky. Smotherman and his crew are staying with the boat in Alaska, to do some maintenance work of their own. 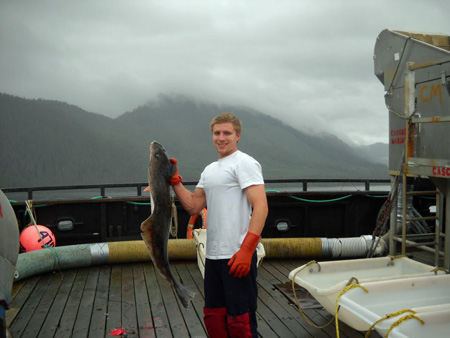 Brandon Smotherman on the Cascade Mariner

Smotherman said his crew hasn’t been able to fish since January 23. The terrible conditions would cause ice to build up every four hours, forcing them to turn their boat away from the weather to break the ice.

“We were building so much ice and we couldn’t break it,” he said. “We had to travel slow, about two knots. Then we’d turn around to break the ice. So we were only traveling about one knot every four hours.”

Smotherman said the bad conditions are a result of the northerly winds, which push the ice and cold air south toward the fishing grounds. He said that the temperatures dropped to as low as 15 degrees, with 50 to 70 mph wind gusts.

According to the National Snow and Ice Data Center, ice in the Bering Sea reached the second highest levels ever recorded in the satellite record for January.

The ice not only poses a threat to the crew, but also to the gear they use to catch the crab. Fishermen use buoys connected to their crab pots to relocate their catch. The ice can cut the line, making it almost impossible to relocate the pot.

When the weather got really bad, Smotherman’s crew had 200 crab pots in the Bering Sea. They were only able to pull 100 without making the boat unsafe, and would’ve lost the other 100 pots if another boat didn’t help out.

With less crab being fished due to the ice, the price for crab may rise due to supply and demand. An article in the Dutch Harbor Fisherman reported that as of last week, only 20 out of the 47 registered boats were still fishing.

“It sucks that we had to stop fishing because we were pulling around 500 Opilios per pot. We pulled about 125,000 pounds in three days,” said Minvielle.

The forecast calls for warmer weather soon, which should allow fishing to resume.

While Smotherman welcomes the warmer weather, he says that it, too, has its dangers. After nearly 2 feet of snow accumulated in Dutch Harbor over the past weekend, melting snow is causing roads to flood.

The break from fishing may have been more enjoyable for Minvielle than it was for Smotherman, but he was glad they were able to get some maintenance done. Either way, both men are anxious to get back to fishing.

(Contributor Chris Foster is a student in the University of Washington Department of Communication News Laboratory.)