Investigators: 5 fires in vacant buildings in Ballard in last 2 months – My Ballard Skip to main content 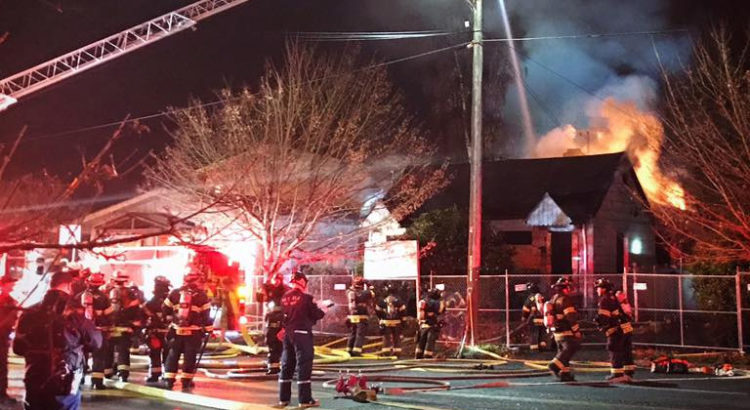 After noticing several fires in abandoned buildings over the last few weeks, we contacted Seattle Fire investigators for a tally — and to learn what started them.

There have been five fires across three locations in the Ballard area in November and December, according to investigators. All of the blazes were started by trespassers who lit warming or debris fires. And in each case, the properties had failed city inspections.

The largest fire occurred on the night of December 3rd (photo above by Mac Jahn), burning an abandoned structure at 8019 15th Ave NW — the largest of three abandoned homes in the same block. Fire crews had to cut through a perimeter fence to access the blaze, and one firefighter sustained minor injuries.

The cause was a “warming fire ignited nearby combustibles,” Seattle Fire told My Ballard.

Six days later, a smaller fire occurred in a vacant house next door, at 8023 15th Ave. NW (next to the Pancake House.) The cause was the same, but the building was not damaged. City records show the third vacant house at 8017 15th Ave. NW — next door to the first fire and part of the same batch of abandoned homes — failed a city inspection in February of 2017, but was subsequently brought up to compliance. These buildings have since been torn down (above) to make room for a single development by Sage Homes comprised of nine townhouses.

Rewind to the beginning of November, and Seattle Fire responded to fire at an abandoned home at 8509 14th Ave. NW. Then again on Dec. 20th, firefighters responded to the same home for a report of smoke. In both cases, investigators say someone had set a fire in the fireplace — the first time, it set a tree on fire, right next door to a new condo building.

“Luckily one of our residents was able to call 911 before the fire did a lot of damage to either property,” said one of the condo residents, Jed, in comments in our earlier story on the fire. He said a man and woman had fled after the fire started. The vacant home failed a city inspection on November 17th, according to city records. There’s no record of the property being brought back into compliance. When we visited over the weekend (above), the home was boarded up.

Last week Jed said workers had re-boarded up the house and hauled away “6 or 7 trips of trash and debris from the house.” He said the developers told him they were planning to demolish the home this month. Records show the owner is 308 VIEW LLC, and the plan is to build two apartment buildings with a total of 24 units.

The final fire in the list occurred at a vacant home at 1443 NW 63rd St. on November 26th, right next to Alki’s Body Shop.

This fire was extinguished quickly, and investigators told us the cause is “small debris fires set.” A search of city records shows the property has received at least four complaints and one citation. “As of 12/21/17 the site has been cleaned up,” explains a note in the records. “Case to remain open until [demolition] and [building] permits are issued to ensure site is maintained.” As we saw when we visited (above), a fence had been installed around the property.

The owner, Greenbuild Development, plans to build an apartment complex with 30 units.

In each of these cases, the city’s enforcement work has prompted developers to respond, some sooner than others. If you see a vacant building that may not be following city ordinance, you can call city inspectors at (206) 615-0808. You can also fill out a form online here.

If you see any trespassers or suspicious activity, you can call 911 or the Seattle Police non-emergency line at 206-625-5011.

We’ll keep an eye on subsequent fires in the neighborhood. As always, if you have a news tips, please email us at tips@myballard.com — it’s a big help.

18 thoughts to “Investigators: 5 fires in vacant buildings in Ballard in last 2 months”