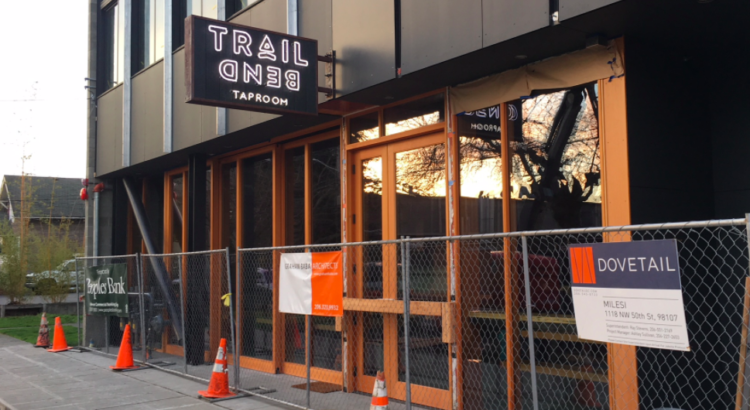 The sign has gone up over the Trailbend Taproom, a new restaurant and bar from the owners of The Dray and The Yard.

Located deep in Ballard’s brewery district at 1118 N.W. 50th St., Trailbend is slated to open in March. With 42 taps and a wood-fired oven, the new restaurant and bar aims to capitalize on the growing brewery crowd in the area.

The taproom is the brainchild of Jamie Butler, Travis Eaton and Andy Walls, the founders of The Dray in Ballard and The Yard in Greenwood. The West Woodland location will be the most ambitious of the three.

“We’ve been trying to find a location there for a while,” said Butler, who says his Ballard home is “triangulated” between the three locations. “The food trucks are great, but some people prefer a sit-down restaurant, and the neighborhood is lacking that.”

The taproom takes up the first floor of The Klotski, a new three-story office development. With tall ceilings, concrete floors and custom woodwork and metal, Trailbend looks like a larger Colorado version of The Dray. Pending city approval, they also plan to open an outside patio. The heart of Trailbend is the 42 taps, stretching 20 feet down the bar. On the wall, a giant sign with movable wooden letters details what’s available at a given moment, “inspired in part by an old train station sign,” Butler says. The taps will feature “a good representation” of beer from the breweries next door. In fact, Butler says he’s working with Stoup Brewing to create “Stoup Trailbend IPA,” a co-branded beer for the opening. We also spotted Reuben’s, Populuxe and Fremont on the sign. Also on tap: cider, ginger beer, wine, Stumptown cold brew and a cocktail or two. “There will be a little bit of everything for everyone on tap,” he said.

As far as food, Trailbend is designed around its Wood Stone Oven — a popular oven created by a Bellingham company — that will create wood-fired pizza. They’ll also serve entrees, sandwiches and salads to attract folks in the neighborhood, too.

“There are a lot of homes around there,” he said while we talked at The Dray, a few blocks away. “We wanted to create a place that’s good for neighborhood.”

We’ll keep you updated as Trailbend gets closer to launch.