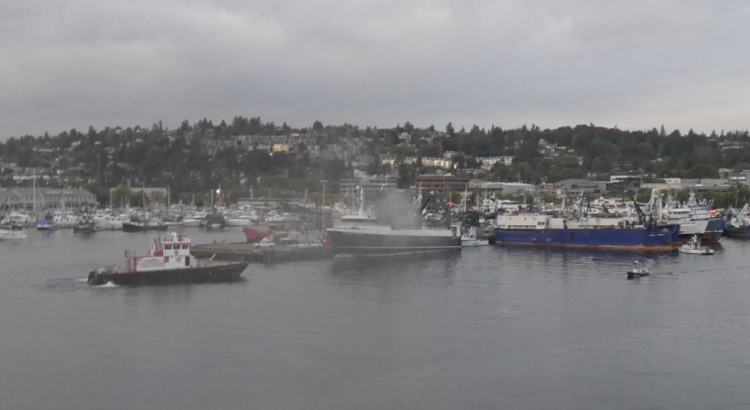 Dozens of firefighters responded by land and by water to a fire on a large fishing trawler at Fishermen’s Terminal just after 7 this morning.

Seattle Fire says there are no injuries.

The fire was burning below deck, which made access difficult. Hoses had to be run down the long dock. But firefighters had the fire under control a short time later. The boat is the “Ocean Explorer“, a 145-foot long fishing trawler based out of Seattle.

Several fireboats, 9 engines and 4 ladder trucks were dispatched to the fire, a massive response from Ballard and surrounding neighborhoods.

(Our thanks to Lucas Bonnema for the photos and to Silver who first reported the story in the My Ballard Facebook Group.)

Bets on whether or not this was started by some junkie smoking a crack pipe while squatting.

Probably just some drunk Scandinavian fishermen after they got drunk, assaulted an Uber driver and tried to rape someone. Just another fun night in the “Old” Ballard!

Who is Lucas Bonnema? Those are good photos

these are the same people that complain about having to help homeless people in need.

your tax dollars at work folks

Junkies =/= legitimately needy
Idiots conflate these to steal money and shame those who can make the distinction.
You cannot throw money at them and make them functional people. Yes, addiction is a disease, but so is ebola.

Anyone know the owners?

Hey Geeky Swede. Can you either eliminate comments or switch to something like Disqus?
The ease of guest commenting on here just makes the site a troll fest.

I’ll be the designated troll detector. Whenever “junkie” “rv” “pipe” “crack” “homeless” “steal” “tent” “money” come in the same paragraph it’ll be labeled simply with a “troll” from me so we easily can pick them out, especially if it’s off topic and degrades a group of people. I agree, it’s selfish people who ruin great forums and things like this

Now I heard Mike O’Brien served up homeless for the tents
But Mikey wouldn’t do that he only cares about the bikes
Jenny’s alright, Mikey’s alright
They just want to spend your taxes
Surrender, Surrender
But don’t vote them back in office, office, hey heyyyyy

Why don’t you clean the junkies out of the city, instead? That way your neighbors of every political persuasion can enjoy this expensive city. Oh right forgot it’s more important to virtue signal about how tolerant you are while the whole city gets pozzed by criminal addict scum.

lets focus on solutions! Come on now, get it together fela

Anybody can use their smart phone to find out what’s going on very easily. Just search “city of Seattle 911 calls” and you’ll be able to see the what/where/when’s. This is what this site is good/meant for.