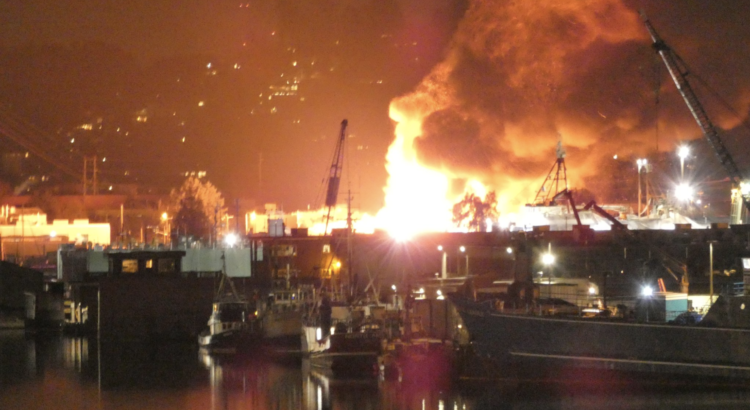 An historic lumber warehouse caught fire in North Queen Anne along the Ship Canal Saturday night, spreading to nearby buildings and drawing a massive fire response from all across the city.

The four-alarm fire burned for hours, closing Nickerson St. and knocking out power for many customers along both sides of the Ship Canal. One building, near W. Ewing St. and 6th Ave. W, collapsed from the blaze, Seattle Fire said. No injuries have been reported.

Photo above from Lucas Bonnema, who photographed the fire from the north side of the Ship Canal. Here are our updates on the fire since it began:

Sunday 1 p.m. We visited the fire scene and posted this follow-up story.

Sunday 8:30 a.m. Three buildings and two sheds owned by Gascoigne Lumber Company and Northwest Millworks burned last night, Seattle Fire says this morning. “The engine company from the Ballard Fire Station arrived first on scene and reported flames up to 100-feet in the air from a fully involved warehouse,” Seattle Fire said. “The massive amount of combustible materials caused the fire to spread more quickly. Two of the structures collapsed.”

Saturday 11:40 p.m. Fire is under control, Seattle Fire says. “Fire investigators are on scene and will begin investigation once fire is completely extinguished.”

11:25 p.m. The fire has subsided substantially, but you can expect firefighters to be on scene throughout the night. Nickerson St. is still closed, and there’s no estimate when it will reopen.

11:10 p.m. Seattle Pacific University in a tweet: “Power and internet are down across campus and we are working to restore both items. We are tracking the fire status and will inform campus when it is safe to return to residence halls.”

11:00 p.m. Seattle firefighters are making progress, and the fire is smaller than an hour ago. There are no injuries reported, and no homes have burned.

10:46 p.m. “Established in 1926, Gascoigne Lumber Company is an independently owned wholesale finish lumber and moulding supplier,” explains the company’s website. That means it’s one of our area’s oldest businesses, back when logs were floated up the Ship Canal.

10:35 p.m. Firefighters from across King County are covering Seattle fire stations, backfilling for Seattle firefighters, due to the tremendous response to the fire. They include Renton, Tukwila, Bellevue and Mercer Island, according to @wapio3021.

10:20 p.m. Here’s a view of the Nickerson St. road closure near the Ballard Bridge: 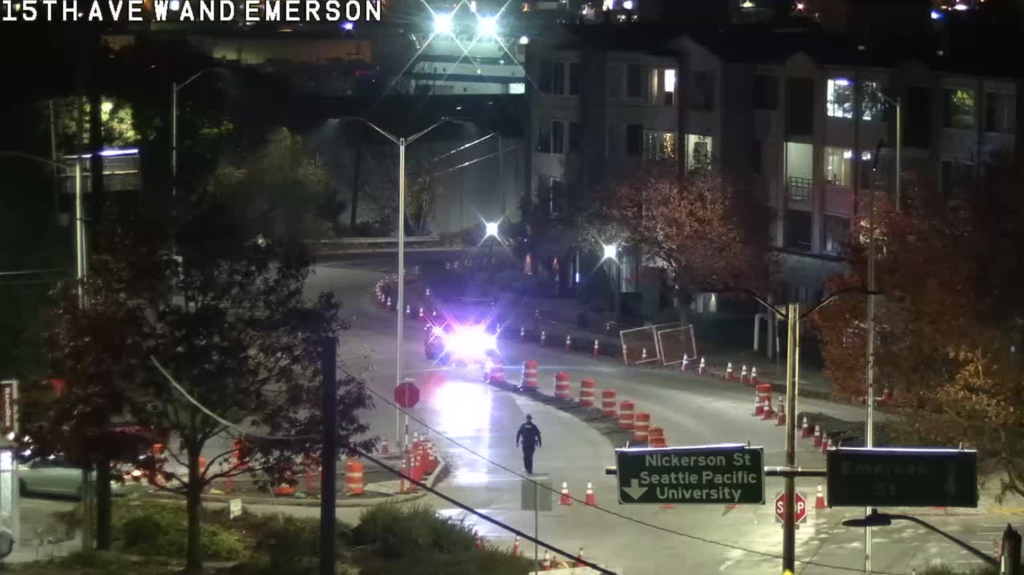 You can see the Ballard area traffic cameras right here.

10:11 p.m. Fire is still going strong. “Building owner of lumber company arrived on scene and confirmed the structure contents is primarily lumber,” says Seattle Fire, which confirms our earlier report that Gascoigne Lumber Co. is burning. There are no reports of any injuries. 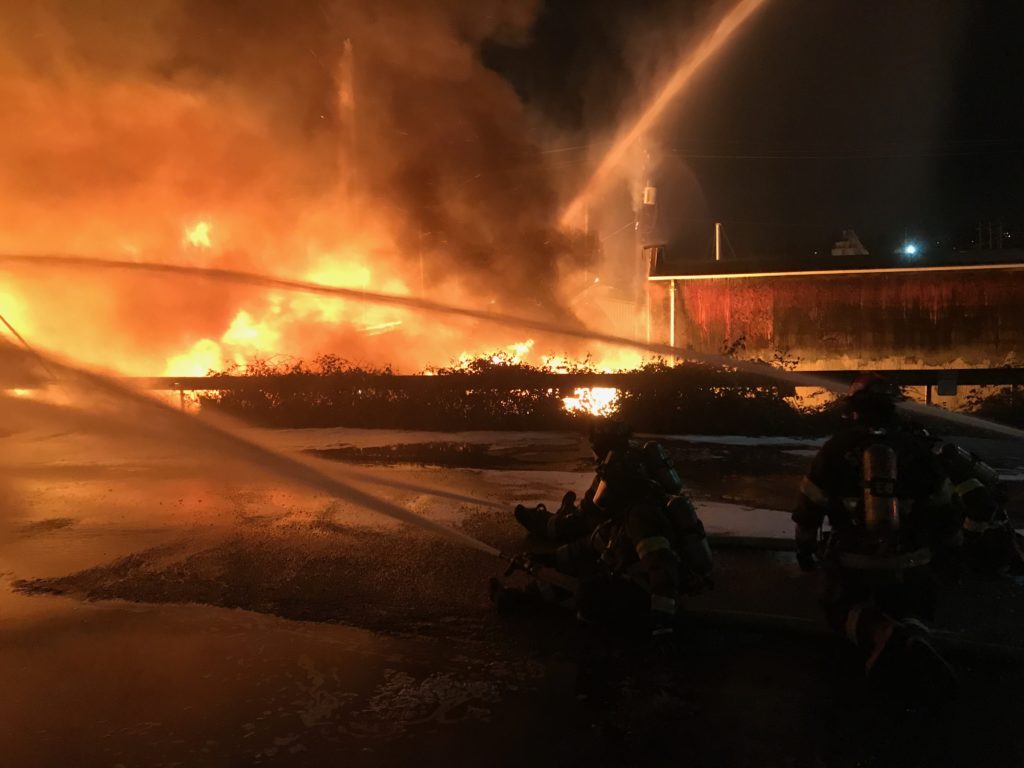 10:05 p.m. Seeing some confusion on social media – in part because some Seattle media believe this is in Fremont, and it’s actually Queen Anne – so here’s the location of the fire right here.

10:00 p.m. Neighbors are advised to obviously avoid the area and close windows and doors to keep the smoke out of your home.

9:52 p.m. Seattle City Light reports 3,642 customers are without power along both sides of the Ship Canal, likely related to the blaze. Outage map here.

9:45 p.m. Nearby Seattle Pacific University says it’s keep an eye on the fire. “Some parts of campus have lost power and we are monitoring each building. We will keep you updated.”

9:40 p.m. At least five buildings are impacted by the fire, which has been upgraded to four alarms, Seattle Fire says. (If you’re wondering, the Seattle Fire 911 website has been down since this evening, so it doesn’t reflect the current fire response.) 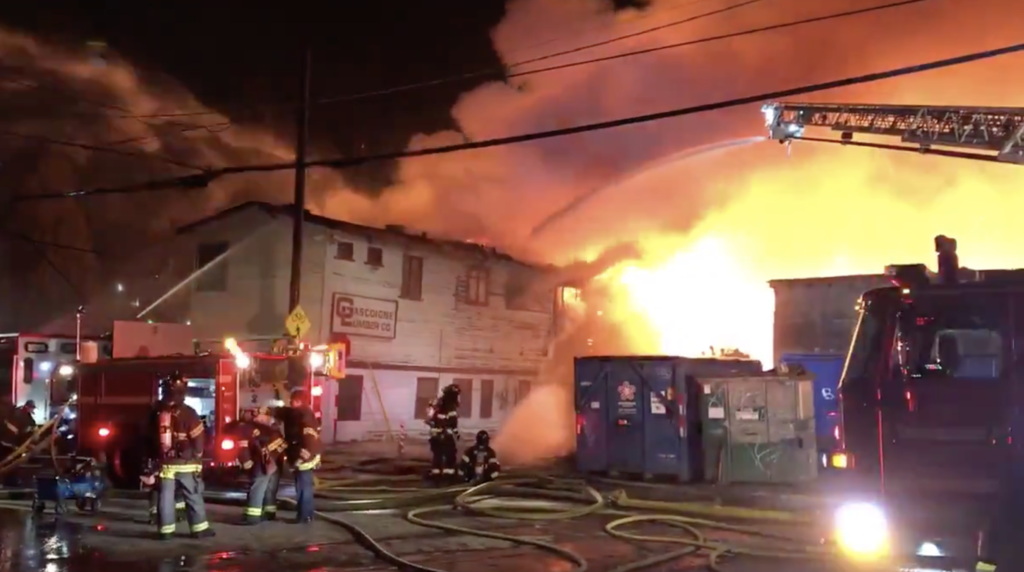 9:32 p.m. It appears the Gascoigne Lumber Co. (above) is burning in the fire, which is widely visible from Ballard, Fremont, Magnolia and Queen Anne.

9:23 p.m. Seattle Fire is fighting a large warehouse fire at 300 W Ewing St., along the Ship Canal on the Queen Anne side. This is a 3-alarm fire with a report of a building collapse.

Firefighters say they encountered flames 50 to 75-feet high when they arrived. Even a fire boat has joined in the fight to extinguish the blaze, which appears to have spread to nearby buildings.

Nickerson St. is closed due to the large fire response.

Isn’t there a junkie camp nearby?

Where *aren’t* there junkie camps in Seattle?

Fake is in on this

Such a tragedy. Gascoigne lumber is a family business and has been around for ever. Well wishes to the family.

The Lucas Bonnema photo was taken from the south side of Ship Canal, not the north.

Now the criminals are burning our city down. They should be removed.

This article is about a fire at a lumber yard.
Your comment is about…well, even this elephant can’t make heads or tails about what you are demanding.

It’s about a fire at a lumber yard for sure. Does a fire just start all by itself there pal? You DID see the part of the story where the owner was concerned over previous fires and the trail close by, right? Should we all pretend, like you, that the area hasn’t gone to S lately with many shreds of human debris littering our neighborhoods? Is the sky even blue in your world?

I am just a simple elephant that politely points out irrelevancies in the comment section.
As an elephant, I have not evolved the proper frontal lobe of the brain required to perform proper fire investigations, especially based on hearsay and speculation made by fellow commentors.

🐘 Good luck with your investigation though! 🐘

Dear Elephant,
No evolved frontal lobe in your brain?
No problem, you sound like the perfect woke and caring Seattle voter!
Bless you and the donkey you rode in on.

Someone wouldn’t sell to condo developers.

On Thursday, there was an arson at the Elks Lodge (the old Ponti building), also on the ship canal near the Fremont Bridge. And I’ve read (though only in one place so far) that there was another fire 1/2 a block from there on 10/28. This looks frighteningly like it could be an arson pattern – and if so I hope they catch the arsonist soon!

No doubt some business people out there doing this. Probably white conservative men is suits with too much time on their hands.

That, or some of our poor, downtrodden, “unhoused neighbors” engaging in “survival crimes.”

Hi, thanks for your support! Even I, Mike O’Brine, wonder what burning down a lumber yard does to help our most vulnerable community members to ‘survive’. What am I saying? Who am I, Mike O’Brine, to question our most vulnerable, loved, needed, wanted, and tolerated community members? Those wacky hobos! You never know what they’ll do next! And remember, Vote Salty, Vote O’Brine 2019!

Oh, thanks Mike O’Brine for tolerating our community in your fine district!
So, if it turned out that this fire was caused by a little propane burner used to cook up a small dose of, say, some ‘survival medicine’, then you would still tolerate us continuing to be a part of your diverse and welcoming city?
Just asking for a friend.

Hi, thanks for your support! Say, you sound like a fine fellow, doogie (…howser)? Survival medicine happens, as they say, in the pursuit of survival crimes! Who are we to judge? Our most vulnerable community members have as much right to burn others’ stuff down as you do! Get woke, friend! By the way, can I count on your support in the upcoming elections? Vote Salty, Vote O’Brine 2019!

This will end well, I’m sure.