We heard sirens and smelled smoke at 11 p.m. last night, so I grabbed the camera and ran over to the 6700 block of Dibble Ave. 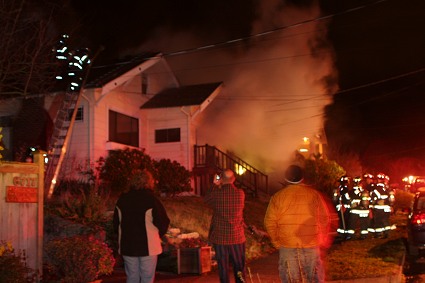 It was one of those nasty basement fires that was kicking out a ton of smoke, and it took firefighters a good half hour to knock it down. It doesn’t appear that anyone was injured, and it looked to me like nobody was home at the time.

Update: The Seattle Fire Department says a dog and a bunny perished in the fire, and five people are without a home. The Red Cross has been called to offer assistance to the family. They didn’t mention a cause of the fire, other to say it was “accidental” and started in the basement.