The hole that was QFC – My Ballard Skip to main content 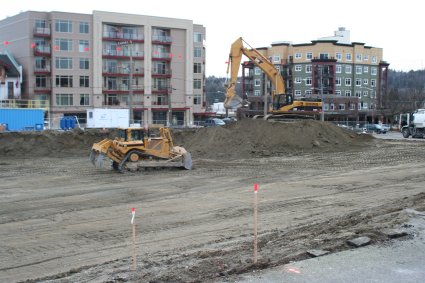 The QFC’s demolition is complete, and construction is now underway for the eight-story apartment building, “Ballard on the Park.”

Adds Karen in comments: “If you stand in the small adjoining park and look west over the former-QFC excavation, you can see what a stunning park this would have made if they could have used both halves of the block. But that would require something completely foreign to Seattle: ‘urban planning.'”

Responds Duncan: “Yes, but seizing the land and constructing another park also would have meant no full-service grocery west of 15th. It’s bad enough having to schlep over to Safeway or Ballard Market until late 2009 when the new building is completed.”