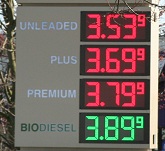 As you know, gas prices are at record highs, so we decided to drive around Ballard to see if we could find the cheapest gas station. But truth be told, they’re all just a few pennies apart. The most common price at all the “central” stations along 15th and Market, is $3.54. Yes, we found one gas station at $3.48 (at Holman and Greenwood), but that’s not nearly enough savings to drive out of our way. Does anyone know of any good deals out there? (By the way, you can track the Seattle average here, which is $3.54 and expected to keep climbing for the immediate future.)

Adds srcsmgrl in comments: “I believe Safeway gives card members 0.03 off of gas, 0.10 if you spend more than…I think…$50.00 at the store. As we have seen on other posts, not a popular option.”