Ballard bicyclists represented this morning during Bike To Work Day. Before 7:45 a.m., volunteers had counted more than 360 cyclists going by a commute station behind Hales Ales in Frelard. No doubt the simply glorious weather – and high gas prices – probably had something to do with the big turnout. 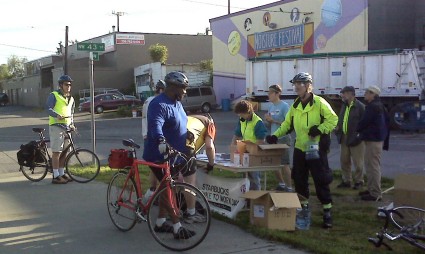 The yearly event has grown dramatically in numbers in recent years, with more than 19,000 riders participating in 2007. We’ll be watching to see what number they report this year.

Speaking of all those cyclists, Sustainable Ballard is sponsoring a design contest for arty bike racks in our community, according to a flier at the Frelard stop. If you’re interested, entries need to be submitted by July 15 and the winning designs will be announced at the Ballard Seafood Fest July 26-27. 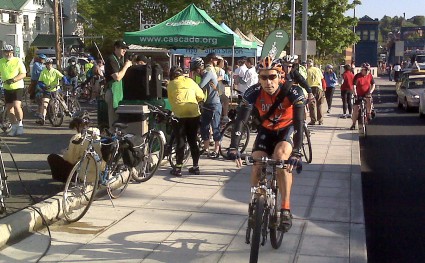 Another commute station in Fremont had a big turnout, too.