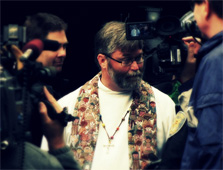 Last week, Rev. Rich Lang of Trinity Methodist Church told his congregation that was going to get arrested, and today he followed through on his promise. Lang was one of 15 people arrested in front of Seattle City Hall protesting the sweeps of homeless camps (see photos by Isabel). “I am convinced that God is on the side of the poor,” he said in a letter to his congregation. “These encampments are very rough on the parks,” said Alex Fryer, a spokesman for Mayor Greg Nickels. “As a matter of policy, we simply can’t have encampments like these in our public spaces.” Rev. Lang was questioned by police and released.

One thought to “Ballard pastor arrested in protest”