8th Ave N.W. is a busy street for cars, buses and bicyclists. There are designated bike lanes north of Market St., but when you get south of Market the bike lanes mysteriously disappear. On our way to work, we spotted what look like markings to add bike lanes south of that intersection. 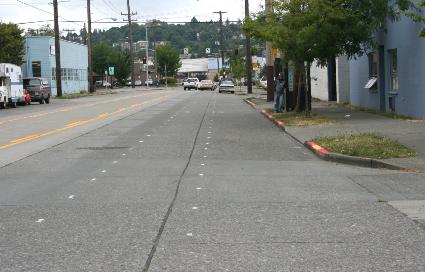 We’ve got calls into Seattle Dept. of Transportation to get more info. Meanwhile, does anyone know of any more new bike lanes in Ballard? (Tip from Russ via our Ballard Twitter page — our first Twitter tip!)

Update: We spoke with Rick Sheridan at SDOT who said that the markings are indeed the prep work for the bike lanes. They hope to have the markings completed by Monday and then will move on to notifying the neighborhood about the lanes. Within the 2-4 weeks following the notification, the bike lanes will be installed. This stretch of roadway is considered a “priority bike corridor” as the city works to install 30 miles of bike lanes this year.

In the forum: Anyone else see those strange signs along 8th Ave?