We read in comments recently (our apologies, we don’t remember who posted it) that the snow plows and sanders had inadvertently eliminated a lane from the Aurora Bridge. Today, we drove over the bridge and snapped a photo: 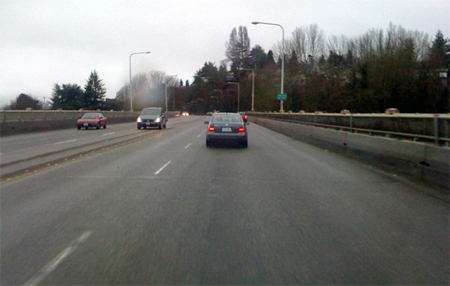 Going in either direction, the reflectors and lines separating the second and third lanes have vanished. We found some drivers were swerving a bit, confused if there were really three lanes or two. (Reminds us of that Seinfeld episode when Kramer adopted a stretch of roadway and converted it into wide lanes, throwing traffic into chaos.) The West Seattle Bridge is also missing a lane. SDOT says it’s a priority to replace the reflectors and paint, so stay tuned.