Denny’s site developer: ‘There is zero financing’ – My Ballard Skip to main content

Exclusive: Months after the controversial demolition of the landmark Denny’s building, the developer of a new condo-retail project at the 15th Ave. and Market St. site says they have no money to begin construction. “There is zero financing right now. Institutional, private, you name it, there’s none,” said Rhapsody Partners’ Katie Vance at the Ballard District Council meeting last night. “Our intention is to take this project through the MUP (Master Use Permit) and hope that this economy and the new president and all these things that are being put into place are a catalyst to move this forward.” Vance said there’s interest in financing the project, but investors are waiting to see how the permit process plays out over the next several months. 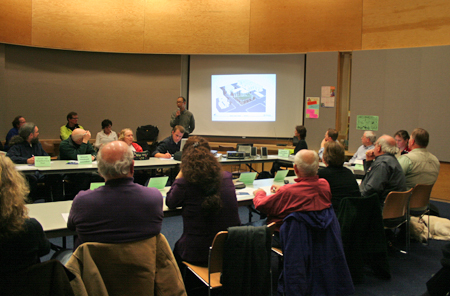 Meanwhile, architect Arthur Chang gave the council a sneak peek into the new but not entirely completed renderings of “Market Street Landing,” the planned complex. “There’s a lot of differing views in the community,” Chang said of his experience gathering feedback from the neighborhood. Chang said the goal was to make the prominent corner structure “iconic,” and he gathered inspiration from the old Ballard City Hall as well as Ballard’s maritime history. 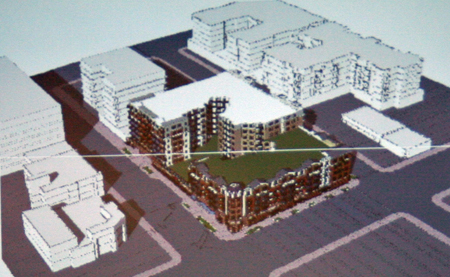 “What we’re trying to do is play off the idea of a lighthouse,” he said of the corner tower. (The photos were shot off a projection screen.) 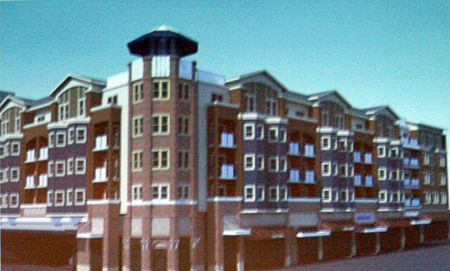 Chang said they made multiple changes to the initial design including rotating one of the structures, adding a turnaround for cars in the courtyard, eliminating an entrance off 56th, adding two escalators, dropping one story of residential housing along 15th and integrating the bus shelter into the building itself. Chang is slated to present the new plans before the city’s Design Review Board on January 26th at 8 p.m. at Ballard High School — a presentation that may end up going nowhere if no financing is found.

Update: This story has been corrected to reflect that Rhapsody Partners expects to take this project “through the MUP (Master Use Project)” not the “month,” as we initially reported.