Bicyclist dies in collision on 24th Ave. in Ballard – My Ballard Skip to main content

Update 8:30 p.m. SPD is releasing new details in the fatal crash this morning involving a bicyclist and a van at 24th Ave. near 65th St. Both the van and the bicyclist were headed southbound on 24th Ave. “As the traffic signal turned green for southbound and northbound traffic (at 65th), witnesses stated the van proceeded through the intersection and the bicyclist passed all the stopped southbound vehicles on the left at a high rate of speed then briefly moved back into the bicycle lane,” police say. “South of the intersection the van signaled and moved into the left turn lane in order to turn left onto NW 64th Street. Witnesses stated the bicyclist attempted to pass the van on the left as it entered the turn lane. The bicyclist collided with the left rear of the van.” Medics tried to revive the 39-year-old man, but his injuries were too severe. 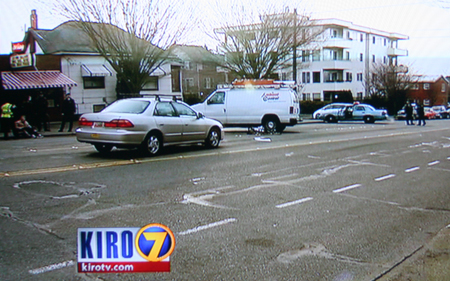 As you can see from this image from KIRO-TV’s coverage, the accident occurred right in front of The Viking. “He was moving,” said one witness named “mBasher” in comments below (#150), explaining the bicyclist carried some downhill momentum through the light at 65th St. “When the light turned green he was passing cars in the bike lane, and the van pulled away from the curb where the bus stop is. He swung wide to the left to go around the van. I think he thought the van was just pulling out into traffic, but when he realized the van was making a U-turn, he laid the bike down and slid under the van.” The SPD account of the accident does not mention if the van driver was making a U-turn or not, but police say the driver was interviewed and released pending further investigation. “The driver of the van is still very shook up and she feels terrible,” said My Ballard reader Kass in comments. Meanwhile, mBasher says an off-duty firefighter and grocery clerk nearby came to the man’s aid as medics were called to the scene. The man was rushed to Harborview as medics performed CPR, but unfortunately he had suffered fatal injuries. Police investigated the scene of the crash throughout the day, keeping 24th Ave. closed for several hours.