A large crowd packed Calvary Lutheran Church on Thursday night to hear about a controversial plan to move an emergency shelter of 20 homeless men into the vacant facility as early as this Saturday. 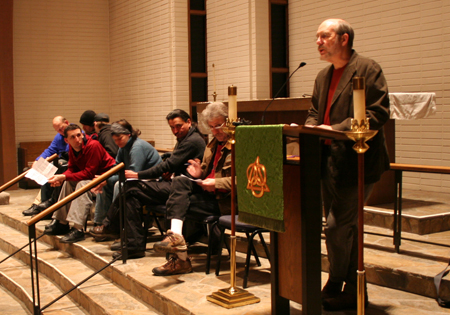 Our Redeemer’s Pastor Steve Grumm, whose church merged with Calvary Lutheran last year, led the discussion with neighbors and 7 members of SHARE/WHEEL, the group that organizes the nighttime homeless shelters. At times members of the audience shouted questions, demanding why they just learned of the plan on Monday. “I apologize for the time frame that’s taking place. This is not typically how we make decisions,” Grumm said, explaining they were approached by SHARE/WHEEL a couple weeks ago. “Our problem is these people were left without a place to sleep by March 1st.” 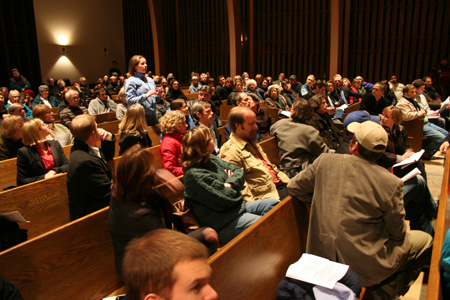 The SHARE/WHEEL members on the stage, all homeless, explained the rules of the shelter and how they police themselves: no alcohol, no drugs and doors are locked between 7 p.m. and 7 a.m. “Each one is held accountable each and every day,” said one of the members named Nicholas. But when the SHARE/WHEEL members were asked for details about the mandatory screening process, they said it consisted of an interview and no warrant or sex offender background check. “I want accountability before you move into my neighborhood,” demanded Diane Travis, who said she’s lived across the street for the last 38 years. Another neighbor explained his wife has been running a licensed, in-home daycare for the last 15 years. “(It’s) 329 feet away from that wall,” he said, pointing to the side of church. A woman stood up and said her child attends the daycare. “I totally support getting everyone off the streets,” she said, pausing to choke back tears. “But I have to protect my child.” 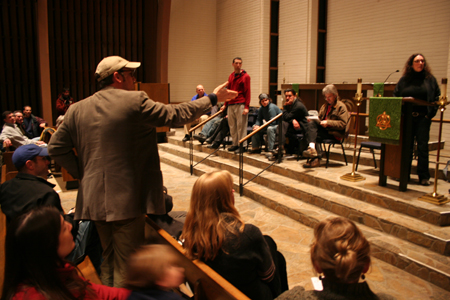 SHARE/WHEEL explained they don’t have a system or the financing to conduct background checks. Jessie Israel, who said she’s on the board of the Ballard Food Bank, said they could offer them background checks for free. SHARE/WHEEL members promised to meet with her to discuss the idea. Terry Mattson, pastor of the West Seattle Church of the Nazarene, where the homeless shelter is currently housed, spoke out against mandatory warrant and sex offender checks. “We would not require that of our neighbors or each other,” he said. “It’s not an appropriate response.” Mattson explained that they had just two incidents over the last 13 months — police were called once, for a belligerent member who showed up drunk and was banned from the shelter. “Our neighbors love us,” said Mark, one of the SHARE/WHEEL members on the stage. “Why don’t you give us a chance? We can be gone in 24 hours.” 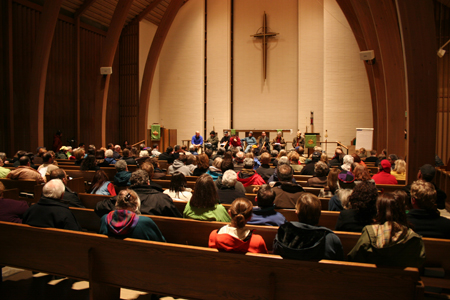 Roughly a third of the neighbors who spoke said they supported the shelter, background checks or not. “I can’t imagine a more appropriate use for an empty building to house people who don’t have a place to stay,” said Joseph Azel, who said Pastor Grumm had a “Christian obligation” to take in the homeless. 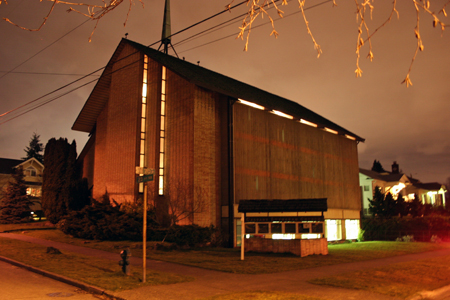 The audience offered lots of suggestions, including a 3 week delay to nail down some details about the plan. Or a 3 week trial period. In the end, Pastor Grumm promised to take a hard look at the community feedback before giving the final green light to move the shelter into the church on Saturday. “This was significant enough for us to say, hey, do we need a new tactic here?” he told My Ballard after the meeting. He said he would be meeting with SHARE/WHEEL as well as keeping in contact with neighbors over the next few days. “When we woke up this morning, we were moving in this Saturday,” said SHARE/WHEEL member Ken as he walked toward the door. “That issue is up in the air.” We’ll let you know as soon as a final decision is made.