First on My Ballard: Rhapsody Partners and architect Arthur Chang won approval from the Design Review Board on Monday night for Market Street Landing, a new condo/retail complex replacing the Denny’s at 15th St. and Market Ave. The board attached several conditions to the approval. 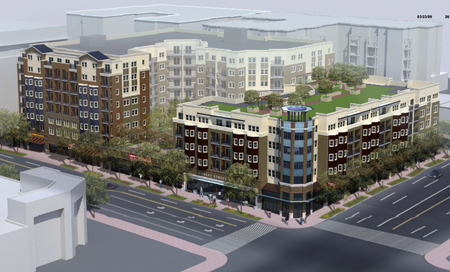 The new design (above) features several changes suggested by the board from January’s proposed design. The two most obvious changes are the corner tower, which was modernized with more glass, less brick and a “subtle glow” at night (see below for a closer angle). And the lighter color palette at the top floors of the buildings, which was designed to diminish the perceived height of the development. The board’s reception was mostly positive, although member Jean Morgan said the new design “looks much bigger.” 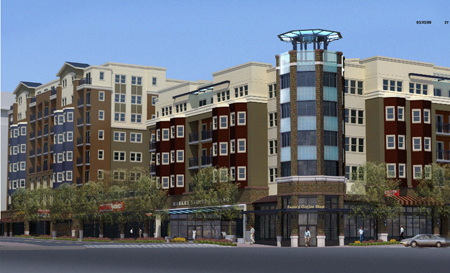 The board spent the most time discussing the merits of these two design aspects, quizzing Chang about different options, even at one point debating the difference of several inches in the height of the corner building. “For better or worse, you picked the most prominent place in Ballard,” said board member Bill Singer. “We’re holding you to a high standard.” Board member Mark Brands emphasized the importance of the corner tower’s design as a new focal point of Ballard. “People are going to name this,” he said. “What’s it going to be called?” 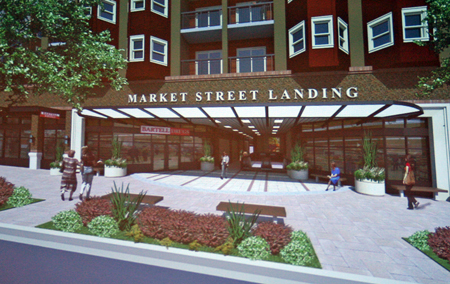 In the end, the board voted to approve the design, but it attached a list of conditions. For one, they asked that Chang tweak the tower design to make it look more like “a single element” and “less vertical,” as well as increase the size of the gazebo on the top, which ties into the rooftop garden. They also wanted the height of the corner building to be slightly reduced, differentiate the window trim and add a community board at the bus stop. 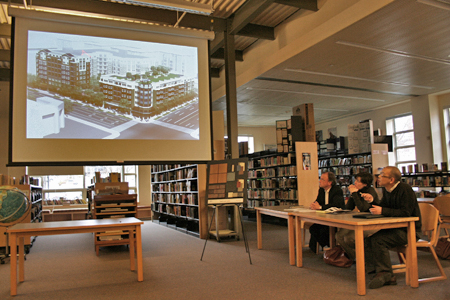 Next stop for Rhapsody after they incorporate the required changes: apply for a Master Use Permit. Rhapsody’s Katie Vance told us after the meeting that until they receive the MUP, they’ll be unable to seriously shop Market Street Landing for financing. By the way, only five people from the public attended tonight’s meeting, and the two people who spoke gave mostly positive feedback — a far cry from the controversy over the Denny’s demolition last June.