During major rain storms, Seattle’s storm drainage systems are often stressed. With large amounts of stormwater and wastewater heading down to water treatment plants, pipes can fill up quickly. To prevent sewage backups, the city will allow the burdened pipes to overflow directly into Puget Sound or Lake Washington without first being treated. 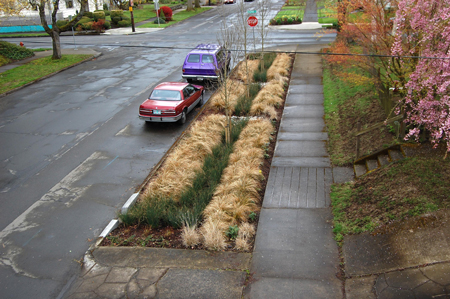 Tracy Tackett with Seattle Public Utilities is working on a way to reduce the amount of stormwater that reaches the pipes. She’s proposing the Ballard Green Streets project. The idea is to build specially designed green spaces in the planter strips between the sidewalk and the street which would catch water in an environmentally friendly way. The water would be slowed or stopped at the source and allowed to soak back into the earth. Phase one of this project would be between NW 75th and NW 85th and 28th Ave NW to 32nd Ave NW. This is an ideal test location, Tracy says, because it has a monitoring station down stream. 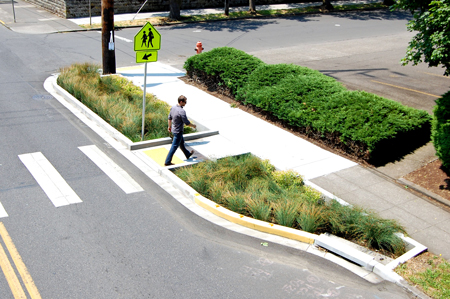 Another idea is to bump out curbs, like shown above, which could possibly slow traffic in busy neighborhoods while minimizing the water that reaches the pipes. Neighbors within the above-mentioned area will be receiving a letter in the near future describing this proposal followed by a community meeting. This is not a guaranteed project, neighbors need to approve it before it can move forward. Tracy says if phase one is successful, phase two would be all of Ballard south of 85th and west of 15th. East of 15th is in the King County basin and not maintained by the city.

These are interesting ideas. I like the thought of the plantings, so long as they are cut and don't grow wild. The curb bulbs, well there are few streets in the area that are large enough for them. Overall, its a good idea, but I would like to see what places they want to put the bulbs, and I don't mean tulips.

now I realize we are trying to do right by the earth but…this idea makes it seem like we'll have all 2 lane roads.
The bike lanes worked out well but squished the roads and now this will trim the roads into 2 lanes? Where are the cars and buses that the roads are built for going to fit? What about bumping back into the property line, not the street?
And who will be responsible for taking care of these plant lines? Not the city, they don't take care of the parks we have! And not the “owners” , that won't happen..I think the general idea is a good one, well motivated..but not entirely thought through…

These are good ideas in theory. The Achilles' Heel is the maintenance issue. Property owners are typically the ones responsible for maintaining those areas, and many don't lift a finger to do so. The City has enough trouble as it is maintaining planting beds in the parks, much less parking strip planting.

In an ideal world where all property owners spend an hour or two a month weeding and pruning, then it would be a fantastic solution to the stormwater problem.

Forget bumping out curbs. It's not realistic — many of our streets are too narrow as it is and many residents don't have garages and need parking in front of their houses. The cost and hassle of construction crews on our streets would hardly be worth it.

Just let people do planting strips. They add a lot to the aesthtics of a neighborhood. The flip side is that they do take maintenance and cost more in water usage for the homeowner, so FORCING people to do it is not a good idea in my opinion.

Even as a pedestrian I hate the curbs idea. It'll cause a lot of space issues between cars and bikes. Not practical, in my humble opinion.
The planting strips, though, sound like an excellent plan. And planting strips always seem to stay maintained, so I don't see an issue there.

these are both good ideas in theory, but they don't go nearly far enough.

what we really need are more green roofs. most houses push or exceed the 35% coverage allowed on the lot, and most of it is impervious roof.

plant your roof–now that will make a difference.

The new Ballard Corners Park at 17th and 62/63 has a rain garden re-work of curved sidewalk.

I fear I'm not grasping the full concept here. Right now the planting strip between the sidewalk in front of our house and the street has two trees surrounded by lawn. Does this mean I need to dig up the grass and plant bushes or that long grassy stuff that has to be trimmed?

here is a bit of info on the other green streets project that i know of. but this one went much further by removing a sidewalk on one side of the street. if you have never been up here you should check it out.

i love those streets, but i know not everyone would. it feels so much more natural and way better to look at. the only downside is decreased parking. if your street is packed with cars, this plan would not be met with a lot of favor.

one more article on it… half way down you can see a visual of how their streets removed sidwalks, installed angled parking and added retention swales

Why is the city wasting money on this when it is already being done. Every time it rains, the street out in front of my house is a lake (3 across covering my whole driveway). And from November to March, they can't read my water meter because my planting strip is underwater (the water table is at the surface). Where will the water “drain” to anyway? (Besides my basement).

that is exactly the point mad hatter. if there were more swales and ways to handle rain water… you wouldn't have that problem.

don't underestimate how much water certain soils/plants/swales can absorb.

it won't hangle 100% of the problems but it will reduce them dramatically.

“East of 15th is in the King County basin and not maintained by the city.” Huh??

Thanks for the links, gooner, very pretty pictures. I still don't know what my responsibilities would be, but I guess I'll wait for it to happen rather than worry about it now. I don't think the idea of losing parking spaces would go over very well in my neighborhood, though. If only more people would get rid of their cars, but that's a hard transition for most people to make. Parking problems don't bother me personally, as my electric-assisted bicycle fits just about anywhere.

If you want to have green streets, you should limit them to pedestrians and bicycles.

Great idea. To address some concerns:

As you can see in the first picture, the curb is cut so that the water flowing along the side of the street will divert to the “garden” (planting strip). Selecting plants that are drought resistant and that will supersede or overpower weeds will take care of the maintenance question.

My question is whether this will increase the water-insect population, namely mosquitoes.

Third, I think the bulb idea could work extremely well on 28th avenue where I know speed is a concern. Many of the intersections along 28th have enough extra space to afford what would essentially be a small park (like the one on Market st. and Ballard ave. or the corner of 67th and Greenwood on Phinney Ridge).

That was my reaction, too!

Thanks for the links, gooner. I really like that project myself, but agree that in areas that need on-street parking that probably won't work. A side benefit is that the “curvilinear” road prevents high-speed through traffic.

I still worry about the bulbs funneling bikes and cars together at a point where the drivers/riders will also be worrying about cross traffic. I ran into this with the bulbs on 14th (at 58th?) and felt very unsafe as a bicyclist. I'd probably stick to riding on the sidewalk with such a setup.

Just the next step in the mayor's plan to wreck the city and make residents as miserable as possible.

Parking? Sorry, no more parking on the street. You want to park on the street? OK, apply for a monthly permit for the city, and hope you have an extra hundred bucks a month for that.

Only exception will be for scummy old Winnebagos with bums livinig in them – they'll get free parking.

Careful not to step in the excrement.

No one told you about our dastardly plan to green the working class and their smelly pick up trucks out of Seattle?

All the smelly crap goes stright to Balard now. Mostly campers, not so many pickup trucks.

Horrible idea. If anything we need to remove the sidewalks and green strips to make way for more cars. The more cars we have on the road and the faster those cars can drive, the better things will be. We also need to eliminate buses and bus lanes. Traffic would be so much better if there were no buses and everybody drove a car like they're supposed to.

I live on Sunset Hill, so was intrigued by the recent presentation on reducing street runoff in a 10 block area through the use of swales and diverting water into the ground. I was wondering, since this is an area prone to active bluff sliding, such as a recent one in front of a residence just south of the park on 75th, what is the impact of adding additional water to this steep slope area? The proposed area, as described, is just a few blocks away from the bluff. The residents here are generally careful to control water runoff and avoid putting water in the ground. Also, most best management practices from other agencies, discourage the introduction of additional groundwater in these areas without adequate detention facilities.

One quick reference from WA DOE: