A deafening flock of crows swirled above an East Ballard neighborhood this morning after one of their own sparked a small power outage. 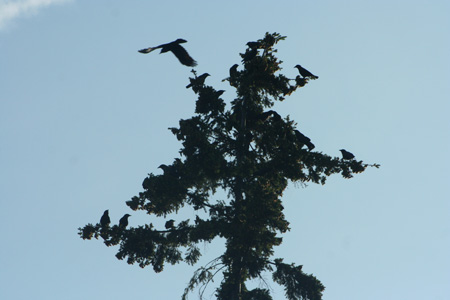 Before we could make our first cup of joe this morning, a loud bang outside the My Ballard headquarters was followed by dozens of alarmed crows flying and cawing overhead. A crow had lost a fight with the power lines just before 7:30 a.m., dropping dead into the street below. Only five or six neighbors lost power, but we’re sure that people from blocks away could hear the birds. Seattle City Light responded quickly and got the power back on within an hour.