The skateboarding bowl at Ballard Commons Park became the scene of a raucous skate showdown and chowder cook-off today. 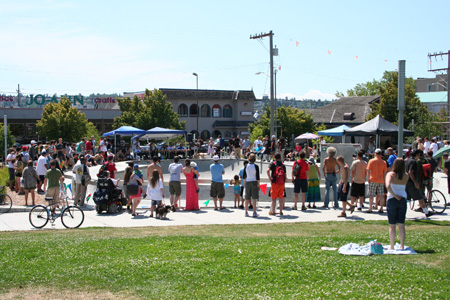 Spectators lined the bowl to watch skaters grip and grind. 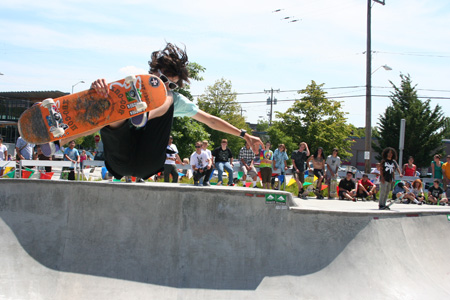 From blocks away, you could hear the announcer on the loudspeaker yell, “Whoa!” whenever a skater scored a gnarly move. 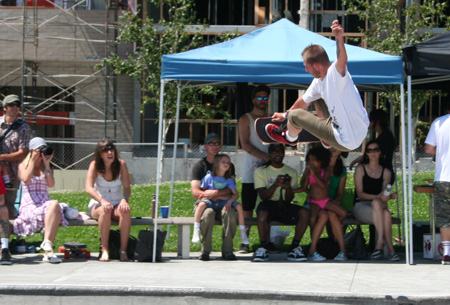 Or caught some serious air. 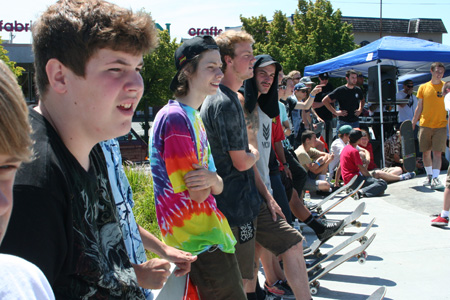 Then cooks competed in a chowder cook-off. The unusual combination of events was the brainchild of Salmon Agah, a pro skater who has put on similar events in San Francisco, but with chili instead of chowder. We have to wonder if skaters and chowder really go together, but it was an exciting event to watch.

This I'm sorry I missed. It sounded like a lot of fun. It's a really nice little skate park and there is lots of room for events over there. Hope there are more of the same.

I was disappointed when my daughter recently decided she's not interested in skateboarding anymore. Oh well. When I was a kid there was no where safe in Seattle to skateboard so I'm glad to see more skate parks popping up. I heard on the news there is an amazing one down at Seattle Center now too.

Gosh, I love this blog!

“…whenever a skater scored a gnarly move.”

Really? When was the last time you used “gnarly” in your ordinary speech? Or ever?

It's an 80's thing. Some of us just have trouble letting go. I, myself, have had repeated requests to stop saying 'fab' all the time. ;-)

I think they were being tongue in cheek. It's fun to use outdated lingo, daddy-o! All the totally bitchin' kids are doin' it.

I'll be taking my horseless carriage down to ye olde Nickelodeon and get some moonpies as well! 23 Skidoo!

I won this competition. It was a great turn out!

Groovy. Congratulations on the win, Mikee!

And through it all, Vans endures…

In our defense, we heard the announcer say it several times. So it must still be cool.

I see. It's a technical term.

Congratulations, Mikee! You kids scare the crap out of me, and I respect that.

YOU KIDS GET OFF MY LAWN!!!

Very rad Mikee. I was very impressed with Seattle's talent. The first heat of the finals run was off the hook. Thanks for throwning down! Made my Saturday afternoon. I got a bit sunburnt though.

I posted a couple vids from my iPhone of your first heat on my flickr:
http://www.flickr.com/photos/brianbehrens/37324…

Thanks so much for posting the vids, Brian! So cool to see Mikee shred!

It's all in how it's used. If you're not proficient in the lingo and its application, best to stay clear or wind up sounding like, well, uh, how do I put this? A couple of old parents reading from the First Edition Teenage Slang Dictionary and Thesaurus.
The other thing that happens with misuse of the slang is that it comes off as a condescending put down to those involved in the event, and skaters in general, which we know was not the intent.
Hate to be critical of the sitekeepers, as the GS team does a wonderful job and we love you guys, but as a former skateboarder I remember all too well having to deal with the stereotypes.

You ruled that bowl and smoked everybody! Their were some great tricks thrown including the guy spinning McTwists. But you were on fire all day long. I got some great shots and series of you. If interested let me know. Congrats and I hope you got a lotta great merch.

Ya thatd be great i need some photos..thanks everyone for the props!!