The Tractor was lit up in Old Ballard on Monday night as MTV crews shot new episodes of “5 Dollar Cover,” a scripted show that features local musicians. 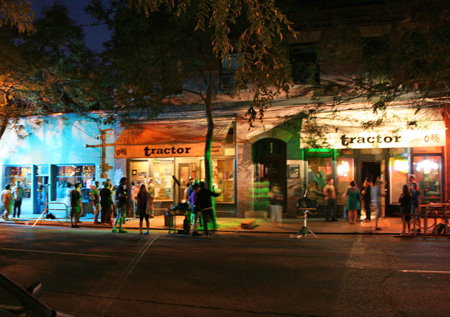 Crews shot The Maldives perform and followed up with some shots outside. 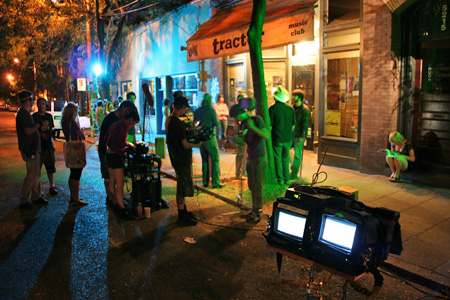 We caught up with David Gale, executive VP of new media for MTV, who was enjoying a beverage at Kings Hardware next door. “Everyone is local,” he said, explaining that the director (Lynn Shelton), crew and musicians are all from Seattle. “It’s a look at the city’s music scene from up-and-coming bands,” he said. Real musicians act out real stories, Gale said, adding that the show is designed for the web with some components airing on TV. 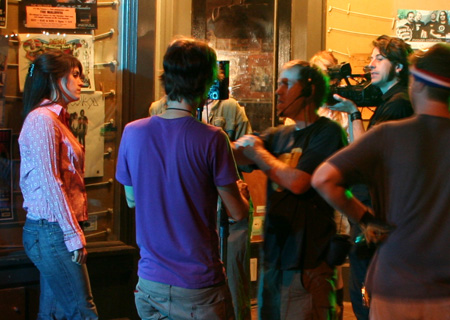 This is the second city for MTV’s “5 Dollar Cover.” The first, Memphis, is available online. MTV crews will be shooting at The Tractor again on Tuesday with other shoots to follow around the city. In all, 14 local bands will appear in the show. By the way, the Maldives will be helping The Tractor celebrate its 15 year anniversary with a CD release party on August 27-29th.

Wow it's like The Hills but in Ballard. Maybe they can call it The Locks.

MTV is to music as KFC is to chicken.

I remember when Real World was setting up in Chicago a few years back and the entire neighborhood rejected them. Hundreds of people blocked off the street on the first night, some throwing paint at the building and roughing up the guards hired there. The producers (the evil bunim murray) couldn't comprehend why people don't like MTV.

Nice! Thanks for covering. I rode past this last night and was curious as to what was going on.

With the Internet, it's almost impossible for any musical outlet to be cool anymore. Information is no longer hard to attain, so it isn't as special. And, while we age 1 year at a time, MTV's target audience is reset at 1 year younger. So each year, the content is twice as irrelevant.

Nice for the Tractor.
Although, $5 dollar cover isn't typical.
MTV, well, it's for the wee-teeners, or wee-teener wanna be's.

Does MTV really suck now? Or have we simply grown up and away? I suspect the latter.

I suspect you're right. I could use my little old lady voice and say how much better MTV was in 'the old days' but it would be complete nonsense.
Sigh….I'm just out of their demographic now.

They were also at the Sloop earlier getting lunch and sloopers. Happy Birthday!

Yeah, it still sucks.
NoraBell, it was never good, ever.
Well, they did show some good stuff

Hey, we had Weird Al and Van Halen (when VH still rocked). MTV in the 80's didn't completely suck.

You picked out two of several.
Btw, Viacom was where the local stuff got air play then,
and I know that for a fact, several times over.
Ever heard of 'Rising stars'? That was Viacom.
And all local. I don't know who does it anymore.