On the 100th anniversary of the 1909 Norway Day celebration in Seattle, the Viking ship replica Nordic Spirit hit the open water Sunday for the first time since it was painstakingly restored. 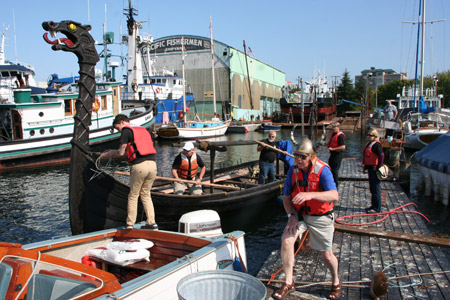 The boat was donated to the Nordic Heritage Museum 30 years ago, and after months of restoration work by boatwright Cornelius Sprenger and Pacific Fishermen’s Shipyard, it was ready to sail again — a short voyage from Ballard to the Fishermen’s Terminal for the Norway Day festivities. The journey mirrors a voyage 100 years ago, when another Viking replica sailed across Lake Washington for Norway Day at the Alaska-Yukon-Pacific Exposition. 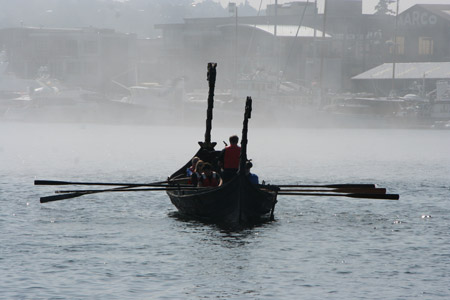 After a few last-minute repairs and safety instructions, the Nordic Spirit pushed off from the dock. It nearly disappeared into a mystical layer of fog that covered the Ship Canal. “It was just an incredible sensation to see it, for me, to sail through the mist as if it were a brand new boat. It was fantastic,” said Eric Nelson, executive director of the Nordic Heritage Museum.

Another boat was on hand to provide a tow, just in case, but the men and woman at the oars provided more than enough power. 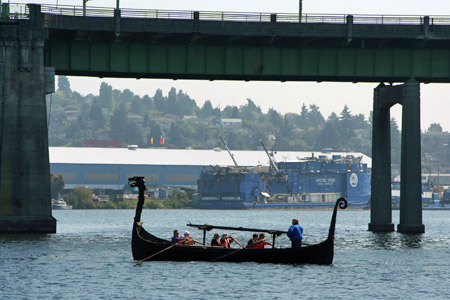 In fact, the Nordic Spirit made such good time, they pulled up to a dock under the Ballard Bridge and walked over to Mike’s Chili for lunch. 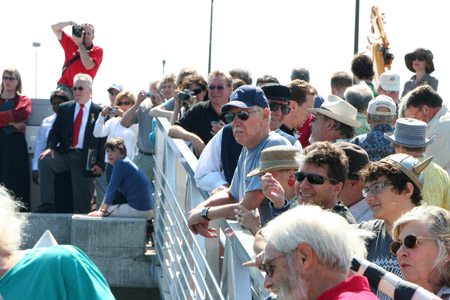 Then right on schedule, the Spirit rowed into Fishermen’s Terminal for the 100th anniversary celebration of Norway Day. A good crowd watched, cameras at the ready, as the Viking ship approached. 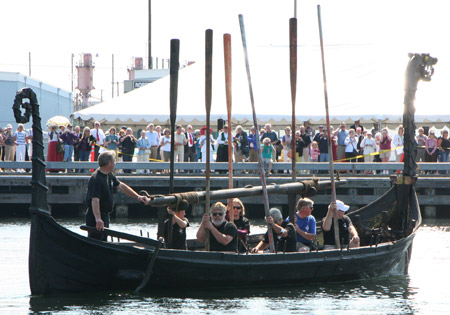 When it arrived, the boat’s crew raised the oars. “The last time it was in the water was back in the Delaware River, and they had a guy with a pail scooping out the water,” said Olaf Kvamme, a local historian and longtime member of the Nordic Heritage Museum. “I’m glad the museum took the initiative, it’s great.”

Kvamme and Norway Honorary Consul Kim Nesselquist did the honor of christening the boat. “Do you know the price of alcohol in Norway?” Nesselquist (left) joked before swinging the bottle against the stern. A few swings and laughs later, the bottle broke and the Nordic Spirit was officially dedicated. “It was really important for the museum to preserve it, and no better way do to that than get it restored and back in the water,” Nelson said. “To see it actually in the water, floating under its own power, it was remarkable.”

Watch video (above) of the inaugural voyage and the dedication.