Last winter was, well, snowy to put it nicely. It was rough, cold, wet, white, frozen and miserable on the roads. 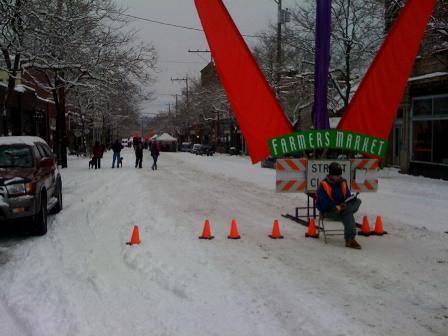 Mayor Greg Nickels gave the city a “B” for snow response but the citizens immediately corrected him. Many felt the city was slow to respond and didn’t deserve a high grade. According to a Seattle Times survey taken last winter, of the 2,657 people to respond 49% gave the city an “F.”

The city has now released its new snow plan. “Based on nationwide best practices, our new plan will ensure Seattle is ready for any kind of winter storm,” said SDOT Director Grace Crunican. “With an aggressive, high-tech oriented approach and new leadership, SDOT will keep people and goods moving in Seattle during challenging winter weather.” The city says, “We commit to achieving bare and wet pavement on specified streets within eight hours after a lull in the storm.”

According to the release sent out by SDOT, plan highlights include:

Here’s the snow map (large .pdf) that SDOT will use to determine their response.

The city has also hired a new Street Maintenance Director who comes from Arapahoe County, Colorado and has experience with winter storms.

…but no additional plowing resources or strategy? Sorry to be a debbie downer but its unclear how much better last year would have been if these new tactics had been employed. I'm disappointed.

I prefer the quiet chaos of a city shut down, thanks very much.

Bring on the snow…boo to salt and plowing!

The entire problem last year was that SDOT rigidly followed their plan even though it was obviously not being effective. I watched plows run back and forth on 85th with the rubber tipped plow blades bouncing off the ice for days. The plow drivers knew what needed to be done, the supervisors knew what needed to be done, but nobody was willing to stick their neck out and do it because their snow plan didn't say they could.
I'm afraid that it will become the same thing in the opposite extreme this winter when we get a dusting off snow and an unnecessary dumping of salt.

Arapahoe County contains a great deal of the city of Denver and its eastern/southern suburbs. I should know, I moved from there to here in 2005. While they may “understand” snowstorms, it's a very different situation to undertake a solution. The great deal of snowstorms in Denver put down a layer of black ice, then several feet of dry-ish drifting snow at 0 degrees or below, then it melts and re-melts by slow inches over several WEEKS to form even more layers of ice with more sandy snow on top for sliding. Here, you have the issues of wet, heavy snow with some ice beneath it, which can theoretically all disappear in a day or two. Different types of weather need different treatments. Not to mention, Denver really has no experience to speak of when it comes to having so many bridges over water being the main routes into the metro area. It worries me that they'll apply a snow removal method that really won't work that well in this very different climate.

I 'm going to be pissed if they spread a bunch of salt every time there is 1/2″ of wet snow that melts by noon. Salt really f's up your car (and OUR buses), and they should only salt when absolutely necessary.

Of course they will spend this winter overcompensating to make sure that no one accuses them of not doing enough.

totally agree. one of my fondest memories of 08 was the snow storm.

walking to get coffee in the morning.
sledding with my daughter
not going into work
walking to get a pint of beer in the freezing weather

i would take that every year

Why on earth are they wasting money by putting GPS units on SNOWPLOWS? Utter stupidity, this is so typical of Seattle's moon-struck fascination with the latest bright, shiny object, that will do absolutely nothing to help address real needs, but makes the idiots who purport to be “leading” agencies feel better about having a fleet equipped with high-tech toys. More magical unicorn dust!

“Weather awareness”?! For crying out loud, the trucks don't need “weather awareness” – they just need to have the gear that's necessary to plow the streets, and then they need somebody with half a brain to tell them to go plow the damn streets when they're covered with snow!

How hard *is* this, really?

Could the clowns running the city do a worse job of it if they set out with that as their goal? I don't think so.

I agree however if I was someone who got paid by the hour and couldn't get to work it wouldn't be such a winter wonderland! I know several people who lost a week's pay right during the holidays because of the snow last year. Wasn't much fun for them.

Agreed. It's pretty absurd that Portland has more plows than Seattle even though they're further south than we are. Buy some more plow blades and be done with it already.

I lost pay as a result of the snow storm. Time is more precious than money, I loved it. As for emergency workers/essential services…agreed. But those places of business and organizations need to have their own emergency plan too.

I just don't think Seattle needs much of a plan. I consider last year to be a fluke.

Agreed. And didn't police have to respond to calls on foot because even their cars couldn't make it up any kind of incline?
I BUS and I couldn't get to work. Completely unacceptable.

Yeah, more plows. Seattle is a big enough city to justify that expense.

Salt isn't really that big of an issue on cars unless you're driving a relic from the '70s or early '80s. We're also not exactly living in Buffalo where they'd be salting every day from November to April, so I'm not too worried about my car rusting out.
What I would like to see is a goals oriented plan instead of a policy book. It sounds like we're slowly getting there, but only another big snowfall will tell.

The problem last year wasn't a lack of plows, it was a lack of salt use. The policy was to just dump sand on the road to add traction and compact it down.

That works fine during with Seattle's normal amount of snow, where there is one big dump of a few inches that melts after a few days. It doesn't work when you have multiple dumps of snow that freeze overnight then dump some more snow. Last year we had the latter, and that's why the city had problems.

This year the policy is to use salt as needed. The city isn't going to plow the roads, they are just going to dump salt, which will melt the snow.

I hope you’re right about it being a fluke. I never want to spend 3 nights on a cot in a hospital conference room again!

I’m glad you were able to financially get by without the pay you missed. And I’m glad you and your loved ones didn't experience any emergencies, or weren't dependent on outside help to survive duing this time. But many others weren’t as fortunate as you.

The city MUST have a response and implementation plan. Otherwise it is not serving ALL of its citizens, especially the most vulnerable.

bz – I thought the main idea with the GPSs was to put them on buses so Metro/ST knows where the buses are, if they're able to drive their routes, etc.

I'm driving a relic from the 70's , only I call it a “classic”, and I don't feel like having to get a beater to drive in the winter just because our city leadership is totally reactionary. Salt is only useful when you're trying to melt ice build up on the road, something that has happened in the city, lets see, last year and in 1990. I'm sure there were a couple times before that but you'd have to check with some of the grumpy old folks who post here for the dates. Now that they have this new plan, I guarantee that they are going to be salting the crap out of the road every time we get a dusting of snow and it's going to be totally unnecessary. True, modern cars have much better rust proofing than in the 70's and 80's but rust will still damage your paint and cause your car to rust. You probably don't have to worry about your car “rusting out” but salt is not good for it, and is not necessary to keep the roads clear in this climate. BTW I drove my rear wheel drive 70's mobile to work every day… Read more »

Someone from Colorado who is familiar with snow?

Please, get someone from the northeast who knows how to get a city to take a lickin and keep on tickin. Last I checked, Chicago, Boston and a variety of other cities can keep things humming.

Chicago and Boston are flat. But,yes they know how to deal with it.
Every time I see chicago cops directing traffic in -20 weather I am reminded of how soft Seattle feels when I get back.
I drove my honda civic every day during the snow last year, shuttling co-workers to & from work, and had a blast.

Boston is flat?!?! It's not as hilly as Seattle but I'd hardly call it flat. I guess that also explains why they call it Bunker HILL and Bellevue HILL and Beacon HILL and Copps HILL? There's also the very famous Heart Attack Hill in the Boston Marathon.

couldn't agree more re: the stupid rubber blades. what a total waste. salt or no salt, if the dang blade can't scrape through the stuff and get down to pavement, why bother at all? All the plows did was pack everything down to a nice icy finish. crazy.

I should point out that when it's just light snow or slush the rubber tips work great and don't knock off the “turtles” that mark lanes and intersections.

We all need to be prepared in cases like this. What if we had an earthquake for example? We can't depend on the city or social services to save us. That means all of us, the young, the old, the healthy, the disabled, the rich, the poor need to be prepared to go it alone. Quit blaming the government and start taking responsibility for yourselves.