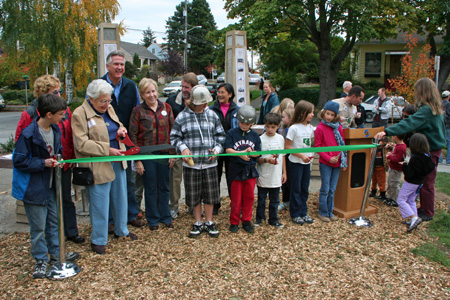 “I now pronounce Ballard Corners Park open!” exclaimed volunteer David Folweiler as the ribbon was cut. He thanked a long list of volunteers, contributors and officials for making the park a reality. 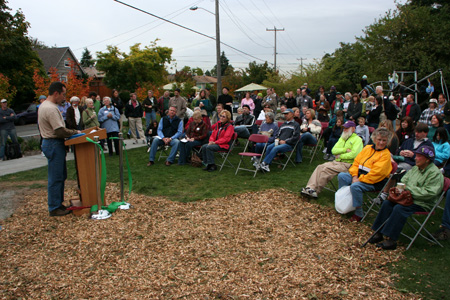 “Dozens of neighbors told us what they wanted in a park,” Folweiler said. “People said they wanted a play structure, a rain garden, a concrete living room, an open lawn and a corner store. And as I stand before you today, I’m proud to say we gave you all of what you wanted.” Folweiler and Rebecca Carr head up the Friends of Ballard Corners Park volunteer team. 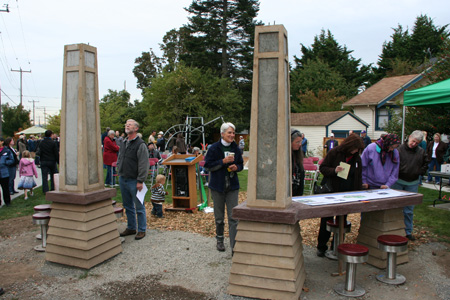 “It’s a rather magical park that is really quite unique,” said Parks Superintendent Tim Gallagher. “You made this park happen, not just by your activities and energy, but by voting for the Pro Parks Levy.” Rep. Mary Lou Dickerson, Sen. Jeanne Kohl-Welles, King County Councilmember Larry Phillips and Seattle Department of Neighborhoods Director Stella Chao also spoke at the ceremony. 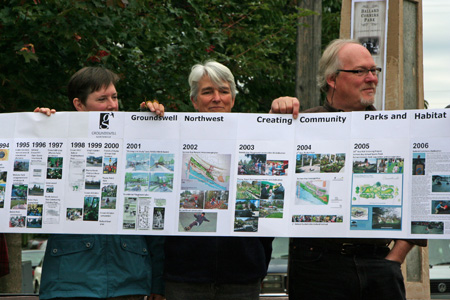 The park has been years in the making. The property was once an empty lot and a home that was “deconstructed” to reuse its materials. Groundswell NW, which is celebrating its 20th anniversary, first identified the site as a park and began the development process. Today, they showed a timeline (above) of all the Groundswell projects over the years. 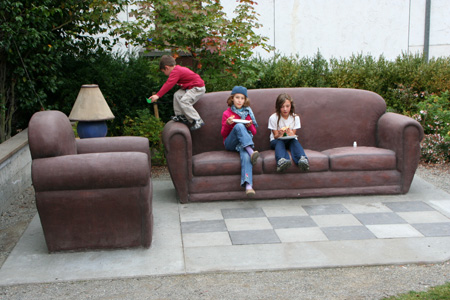 One of the park’s prominent features is the “living room” created by Nathan Arnold — a concrete couch, chair and table that has fooled a few people who thought the art pieces were the real thing. Barker Landscape Architects, Dariotis Construction and WS Contractors all helped with the park’s development. 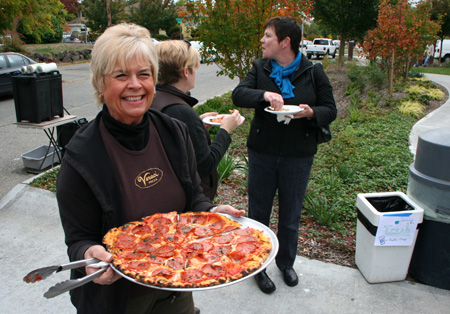 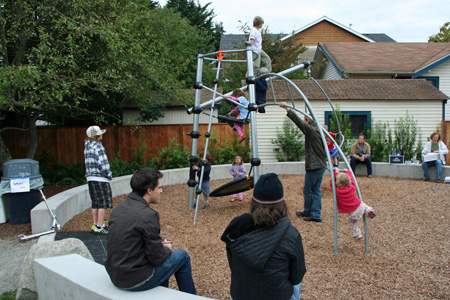 “It’s great, it’s a wonderful place for the kids. We’re here a lot,” said neighbor Matthew Carr. “It’s a nice spot to have close by, and a lot of open space. There are enough things to jump and climb on to keep the all kids happy.”

“I felt it was important for all of us to create something bigger than ourselves, to create a better future for us and our children,” Folweiler said. “It’s a fantastic relief to have the bulk of the effort done. We just have a few remaining details to take care of. It’s just coasting from here on out.”

I thought the city didn't have the money to maintain the parks?

Great! Another park for the roaming packs of Bums in Ballard to hang out and drink in !

Big thanks to all the volunteers for their good work!!!

I really like the plants that have been put in. . .
and the old plum tree shared some real sweet fruits with us this year!

The couch sculpture is really cool.

Oh well – at least they look better sitting on the concrete couch than they do lying in the grass.

But then I suppose some people can take any good news and make is a woe-is-me Eeyore type tragedy.

The city of Seattle needs to shut this park down for the lack of money to maintain the park. Just kidding.

Dang! I missed out on free pizza! And, I also like the couches.

This is what I love about this town.
Opportunities for groups of neighbors to work together to create something long lasting.
Looks like a fun party.
Good job!

Guest
all of a sudden hungry

That's the next revision of MyBallard blog. ;-)

Hey, you forgot to mention the cider press. That was a big hit with my son, I hear. He got to work it himself for ages. The cider was amazing: really like a lovely tart apple in a glass.

Gotta say that while Seattle can't do public transit or infrastructure worth a damn the do manage to create some truly fantastic parks and community centers. Anytime we have friends visit from other cities and even other countries they always comment on how nice the parks are here.

Oh my gosh! I love the concrete living room! it's wonderful that we are still making room for parks and new ideas! Go Ballard!

Absolutely agree! One of the things that I love about Seattle is that you can't walk more than a few blocks without hitting a public green space. Even if it's tiny it makes a difference!