Friends and family members packed Shelter on Thursday night, a “soft launch” for a new bar on Leary Ave. launched by longtime Ballard resident Kevin Carlson. Located in the space once occupied by The Station Bistro — right across from Bit Saloon — Shelter officially opens to the public this Friday night. 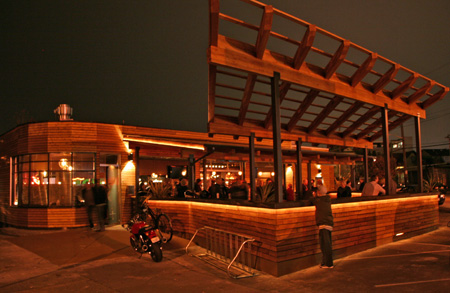 As the name suggests, Shelter features a large, outdoor patio — covered with wood and clear glass — with a unique, circular indoor-outdoor bar. “A lot of people thought I was crazy to do an outdoor area in Seattle,” Carlson said. “It’s unique. It’s different.” The outdoor bar and patio feature heating lamps and a fireplace to help patrons brave the cold winter temperatures. The menu is “sandwich driven,” Carlson said, and there are several entrees, like carne asada, as well as intriguing starters like the jalapeno peanut butter popper. 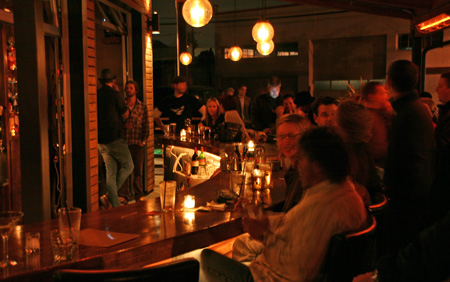 Carlson wanted Shelter to open in time for the summer months, but he said a “nightmare” issue with city permits delayed the grand opening until this week. “I cried on the way to work,” he told us tonight. “I actually didn’t know it was going to happen. It’s been a long time coming, and I’m just glad the doors are open. I just hope Ballard enjoys it.” (Thanks, Kirk!)