Just after 11 p.m., the Seattle School Board unanimously approved the new boundary maps assigning which schools Seattle children will attend for years to come. The vote stretched into the night as directors added amendments to the plan, slightly adjusting boundaries here and there. For the Ballard area, the boundaries for Whittier Elementary/West Woodland and Loyal Heights Elementary/Adams Elementary were shifted slightly from last round of changes. The updated maps and address look-up tool will be available here by next week. 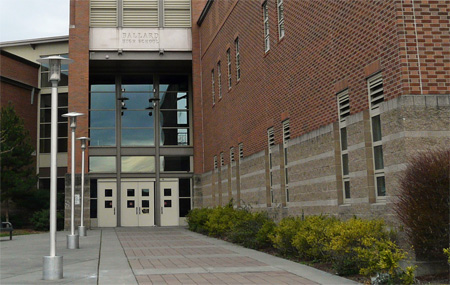 “Many families would’ve liked to have seen the boundary for Ballard to be further north than 85th St., especially those communities, North Beach, Blue Ridge, Olympic Manor, which now largely attend Ballard High School,” explained Seattle Schools Director Peter Maier. “I wish it would’ve been possible… but there simply isn’t the capacity at Ballard High School to do that while we’re serving the entire city.”

From here, a transitional plan will be developed, taking into consideration sibling grandfathering, transportation and educational programs for schools that will reopen. Viewlands Elementary is slated to reopen in 2011.

It WOULD be possible for Ballard students who live north of 85th to attend their neighborhood school…if those seats hadn't been given away to students from Queen Anne and Magnolia. Now, instead of taking a 10 minute bus ride to Ballard HS, our children will have to travel for 1 1/2 hours (and three transfers) on a Metro bus to get to Ingraham. So much for the school district's claim that this new plan strengthens community ties!

It does strengthen our community ties…with Queen Anne and Magnolia.

QA & Magnolia are basically separated from Ballard by the bridge and they're closer to Ballard High then people north of 85th. Ballard is the closest high school for them to attend.

As City of Seattle residents we all pay to support Seattle schools.

I agree. When you all moved to North Beach and Blue Ridge, there was never any guarantee your kids would end up at Ballard HS. Why should kids in these neighborhoods go to Ballard HS when the kids a few blocks away in the less affluent neighborhoods (near Swansons & Small Faces) would still have to go to Ingrahm HS?

It's funny how you all call where you live “North Ballard” to justify your claims to Ballard HS, yet when you tell people where you live or go to sell your homes with water views, you call it North Beach or Blue Ridge.

Queen Anne high school and West Queen Anne grade school were sold to developers in the 80's and are now condos. I think Mic Densmore was superintendent then.

“It does strengthen our community ties…with Queen Anne and Magnolia.”

Which high school do you think QA & Magnolia students have been attending? This might be news for you but they're going to Ballard High now because it's the closest school to them.

It's not an issue of entitlement for “you people”. I would like for my kids to attend their closest school, just like everyone else. By Metro, they would be closer to Roosevelt, Nathan Hale, or even Garfield (not to mention Ballard) than to Ingraham.

Why do people always inflate the time it takes to ride the bus from 85th to Ingraham? 1.5 hours? Nice try. Check the metro trip planner. It is less than half that and not 3 transfers.

Like you were going to let your snowflake walk over a mile down 15th to Ballard.

That is according to the Metro trip planner.

David, which map are you looking at? The distance to 85th is just about the exact same distance as the distance to the Ballard Bridge. The southern end of Queen Anne is way further than any area that has disputed this boundary. Take a look at the map again.

It's over now, n0 pitchforks needed. At least until we can get a decent lawsuit put together. Because as the old saying goes… if you're getting killed in the fight, at least scratch up their face a little bit.

We need to ensure that Seattle Public Schools comes out of this in much worse shape than it went in (which may not be easy to do, given where it's at). Vouchers would be a great outcome here.

As someone living in North Beach this doesn't bother me one bit. I will just send my kids to a private school which would be better than BHS anyways….

So much gnashing of teeth over a relatively short and unimportant time of a person’s life.

I'll make sure that I take my affluence and not shop in Ballard, or attend any of Ballard High School's events seeing as I don't really “belong, ” according to your argument. (Do you know how much Ballard Beaver coffee I have in my freezer?)

Excellent plan! We bleed the District of money, resources, and attention, then bitch that our students' schools don't have enough money, resources, or attention. Or we can live with the fact that we don't always get what we want and try to make the best of the situation.

School bus? Also, it took me an hour and a half to get to ballard from kent so I have a really hard time believing it would take that long to get to north seattle from ballard.

Boatgeek, I think the point is “our” students already don't get enough money, resources, or attention. But yours probably do. So what do “we” have to lose?

In any case, for those parents who are interested in constructive change, another thing to look into is getting charter schools back on the map. These tend to make school boards a lot more responsive, and gives children more options, and in some cases, vastly superior options. Go to the below URL for more information about getting charter schools back in WA:
http://www.wacharterschools.org/learn/nocharter…

Vouchers would be better, but charters are a step in the right direction.

Unfortunately, I can't give a direct link to it, as it doesn't generate a URL for a specific route. But you can go here:http://tripplanner.kingcounty.gov/cgi-bin/itin_… When I did it, I got two itineraries. One itinerary is a little over an hour and the other is about 1.25 hours. Note, these are scheduled times — my experience is this route tends to be slow. So these kids will spend over two hours commuting each day — and that's assuming that we don't lose metro bus routes, which seems unlikely from what I've heard from the city. It's pretty well known that public transit in North Seattle is MUCH worse than South Seattle and downtown Seattle. Itinerary #1 Walk N from NW 85TH ST & 15TH AVE NW to Depart 15th Ave NW & NW 85th St At 06:42 AM On Route MT 75 University District Arrive Northgate TC AcRd & Bay 1 At 07:00 AM Walk 0.1 mile S to Depart Northgate TC AcRd & Bay 3 At 07:35 AM On Route MT 346 Aurora Village Arrive Meridian Ave N & N 135th St At 07:47 AM Walk 0.1 mile W to 1819 N 135TH ST Regular Fare: Senior/Disabled Fare with Permit:… Read more »

Hey, it worked when QA folks sued the school district so they didn't get bussed to undesirable schools.

Whereas it's roughly 10mins longer for a kid from Magnolia to get to Ballard on the bus:
http://maps.google.com/maps?f=d&source=s_d&sadd…

So if you ask me, this makes sense :)

What are you talking about distance! The furthest south that Ballard area covers is 5 miles driving distance south of the school following Elliott and then 15th all the way up.

The furthest North that the boundary goes is 1.1 driving miles from the school. It absolutely is skewed to the south disproportionally!

How come when I do the Trip Planner thing, I get…