The city is looking for information about a mysterious memorial plaque that’s on the bench outside Tully’s on the corner of NW Market St and 22nd Ave NW. The business wants the bench removed but no one seems to know where the plaque on the bench came from. 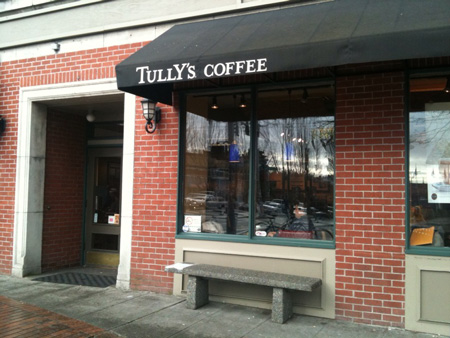 A sign that was taped on the bench by the Seattle Department of Transportation reads:

“This memorial plaque was placed without the knowledge of the city. The adjacent business is concerned about misuse of the bench and asked for it to be removed. SDOT is seeking information on the origin of the plaque prior to removing or relocating the bench. Please contact SDOT at (206) 684-8501 or SDOTpermits@seattle.gov” 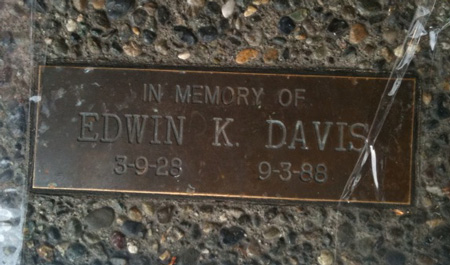 The memorial plaque is for Edwin K. Davis 3-9-28 to 9-3-88. Marybeth Turner from SDOT tells us, “The bench was installed in 1989 with a permit approved by the Board of Public Works, but we don’t have a record of the memorial plaque. At this point we are looking for information about the plaque, and have not yet made a decision about the bench.”

Updated: Tully’s returned our call. We spoke with Scott Earle, the VP of Marketing, who tells us that the bench was originally placed about 12 to 15 feet from the door and somewhere along the line it was moved within inches of their front door and bolted down. He says that people sit and smoke on the bench all day, breaking the smoking ordinance in the city. “As you can imagine, we get a lot of people complaining,” Earle says, “It’s as if people are smoking inside the store.”

Earle tells us that Tully’s has asked the city to move the bench to either its original location or to an other location. Before doing so, the city is trying to track down information on the origin of the memorial.

How many thousands of $$ are we going to spend on this?

Mary Turner is this the only way you can justify you job?

How the hell could someone misuse the bench? Maybe they are worried about people sleeping on it… but come on… More bigger fish to fry… Another reason I skip Tully's! (I am assuming they are the ones who do not like it.)

so the bench has been there since '89, but now some rogue memorializer is going around sticking plaques on street furniture?

misuse of the bench?

maybe desecrating it by inadvertantly pouring some piss-poor coffee on it?

I saw this Monday morning. It was weird, both my father and I kept walking into Tully's continuing the conversation, but eyes were on that plaque.

What do you mean you “saw this Monday morning?” The plaque or the paper taped next to it?

How on earth can Tully's suddenly be worried about the misuse of a bench that's been there 20+ years? Are homeless people camping out on it? Conducting experiments on kittens on it? Standing on it and spreading the gospel of L. Ron Hubbard? Sounds like a crock to me.

I forgot to mention that the widow, Virginia Marie “Ginny” O'Hara, may have been previously married or is later married with the last name “Morten”.

Oh, my god. It's just a plaque, SDOT and Tullys. And not even a very large one. Can we just skip the extra trouble and expense and just leave it there?

It was Professor Plum in the Ballroom with the Candle Stick!

Your tax dollars at work solving our transportation needs. Nice.

Ballardog and Edog, I'm with you! Another thought – is there any better way to get free advertising for T ullys?

oh for pity sake….what's the big deal…….it's WAY better than the grafitti that shows up everywhere!!!!

I have no faith in the cities record keeping. Remember the incident with the “spikes” at green lake? After thousands of tax dollars were spent removing them and investigating the “crime”, the city finally divulged that they put them there…..but forgot.

Leave the bench and the plaque. City, buy a computer to store all of this information. No more post it notes.

See, I read it as “City looking for clues about mystery plague”

Which, frankly, would be far more interesting.

Tully's wants to move the bench because homeless peeps are sleeping on it and that is “misuse”. They are respectfully trying to locate the family so they can let them know where the bench is going.

Wait, I'm confused. Was the plaque JUST installed? Or is someone just getting around to worrying about it now. That's not entirely clear.

zipper – thank you! That makes so much more sense than the original article.

you mean they're trying to locate the homeless family so they can let them know where the bench is going? I'm sure they'd be very interested to know!

If they can not get any revenue they don't want it there.

actually, this was just a study of the behavior of people and the conclusions and assumptions they make when not given all the facts. seems to happen a lot these days. however, i think the reporting could have been a little clearer, obviously several people had problems with the story.

Um, well, yeah. There was nothing in the story about Tully's wanting to move the bench because of sleeping homeless people. The conclusions are made by the facts given. The story reads as the plaque itself is a 'misuse of the bench.' Which got the understandable reactions from readers.

Maybe Tully's is tired of it being a bum warmer…literally