Disfigured, distorted bodies float underwater. A man is having a bloody dance with a chain saw, an axe, or a bow and arrow, but remains calm despite the gore. A cello wails a hauntingly beautiful song that complements these images, and draws you inside.

The bodies, the gore, this is trauma as Kate Vrijmoet (pronounced “vry-moot”) sees it, as shown through her “Accident Series.” Not the initial impact of trauma, but the scars it leaves behind for the rest of one’s life, whether psychological or physical. This trauma is the subject of her new exhibition at CoCa Ballard Gallery (6413 Seaview Ave NW), “Essential Gestures.” 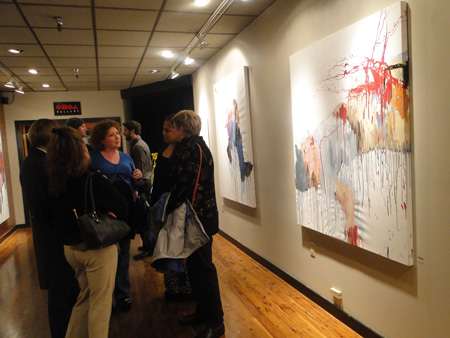 (Artist in center wearing blue)
“I observe life,” she said simply, when asked about her inspiration. Her paintings depict “people as defined by their bodies, their minds, their self-awareness as well as trauma and scars,” according to an informational card available at the exhibit.

It must be stated that Vrijmoet isn’t saying everyone has to experience some sort of trauma through her paintings. That’s definitely not it. The simple fact “that we’re feeling human beings, living human lives,” the human condition is what she’s trying to convey.

She said “it’s hard to answer” when asked what inspires her paintings, specifically the “Accident Series.” 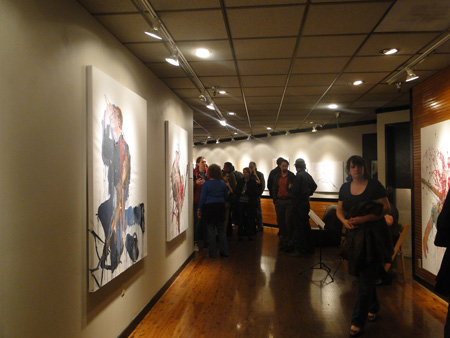 Edmund Burke’s philosophy of the sublime was on her mind, though. In his book, On the Sublime, he says: “Astonishment is that state of the soul, in which all its motions are suspended, with some degree of horror.”

Her “Accident Series,” which features a man going through a series of traumatic accidents, shows that motion, the impact of the accident, suspended in time. “The accident itself is not obscure,” she says.

This is Vrijmoet’s first solo exhibit in her new home of Seattle. She moved in July from New York, just an hour north of New York City, settling in Seattle with her husband, who took a job here. And the most astounding part is that the show came together within a matter of weeks.

“All of these pieces have really weird ambiguities in them that keep me engaged,” said Joe Roberts, the curator of CoCa Ballard Gallery. “She doesn’t provide the answer. Which is great. Which keeps me coming back.” 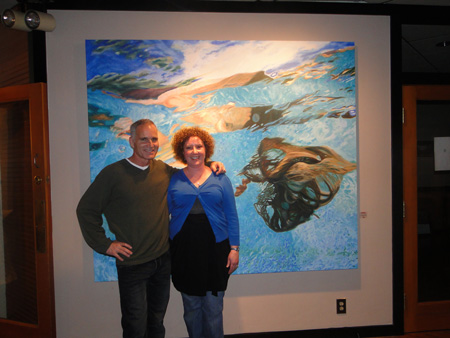 Roberts saw Vrijmoet’s work nearly a month ago and immediately started working on plans for an exhibit. What usually takes about a year to organize, according to Roberts, happened in just three weeks for Vrijmoet.

At the artist’s reception on Thursday, Feb. 11, Vrijmoet was all smiles. People crowded around her pieces, deep in awe, perhaps trying to figure out the ambiguity Roberts mentioned. Featured are a total of eight canvas paintings and 17 charcoal drawings. 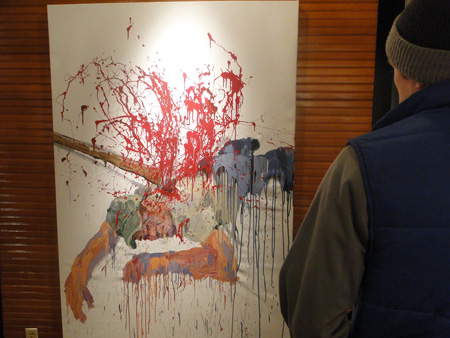 Vrijmoet received a master’s in fine arts from Syracuse University. Even before she graduated, she was offered a teaching job there as an adjunct professor. She also taught as a teacher’s assistant and was awarded “TA of the Year.” Her artwork has been received in numerous shows and exhibits throughout the country.

“Essential Gestures,” is on view now at CoCa Ballard Gallery until March 7. For more information, visit CocaSeattle.org. Vrijmoet also welcomes visitors at her studio in Pioneer Square at 306 S Washington St., located in the TK Building. She also participates in First Thursdays. Her website is figurespace.com.
(Contributor Sarah Kane is a student in the University of Washington Department of Communication News Laboratory.)